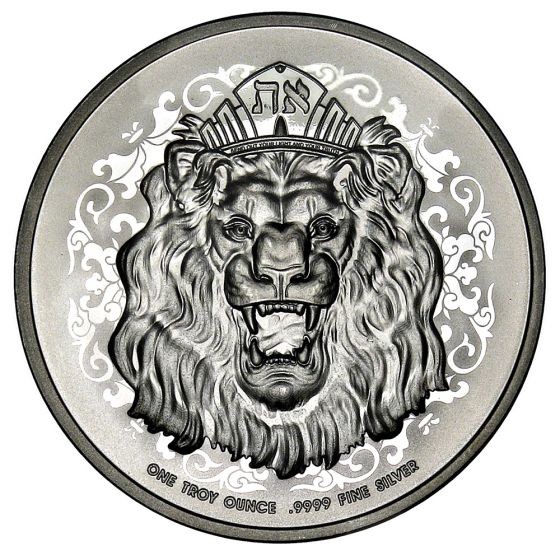 The Roaring Lion Head Series has been in production since 2018 with a beautiful Lion of Judah design on the reverse field each year. The coins are produced by the Sunshine Mint in the United States and come with limited mintage figures each year. The Lion of Judah remains a powerful image in the Jewish state of Israel to this day, thousands of years after the Israelite tribe of Judah adopted it as a national and cultural symbol. Today, 2021 1 oz Silver Niue Roaring Lion Head Coins are available to you online at Silver.com.

The biblical figure of Judah is the fourth son of Jacob, also known as Israel, and is considered the ancestor of the Tribe of Judah. The Book of Genesis, specifically Genesis 49:9, speaks of Jacob blessing his son Judah with the lion as a symbol for his tribe. The Lion of Judah would go on to become a symbol for centuries of the city of Jerusalem, the capital of the Kingdom of Judah. In the modern era, the Lion of Judah remains on the emblem of Jerusalem.

All of the 2021 1 oz Silver Niue Roaring Lion Head Coins available in this product listing come with individual or multiple packaging options. The coins are housed individually in plastic flips, in multiples of 20 with mint tubes, or in multiples of 500 with Monster Boxes. Each of the coins comes in Brilliant Uncirculated condition.

Queen Elizabeth II features on the obverse face of all 2021 Silver Niue Roaring Lion Head Coins. Her Majesty is depicted in the fourth-generation British design as created in 1998 by Ian Rank-Broadley for the Royal Mint. In this right-profile relief, the Queen is shown wearing the Girls of Great Britain and Ireland Tiara on her head.

The crowned Lion of Judah is found on the reverse side of the 2021 1 oz Silver Niue Roaring Lion Head Coins. The design shows the head of the lion in front-facing relief as it wears a crown with its thick mane falling gently in curls around the shape of its head. The lion releases a fierce roar as it wears a crown on its head that has the Hebrew letters of Aleph and Tav, with an inscription on the crown’s rim that reads “Send Out Your Light and Your Truth.”

Please contact Silver.com with any questions when buying silver. You can call us at 888-989-7223, chat with us live online, or email us directly with any inquiries.