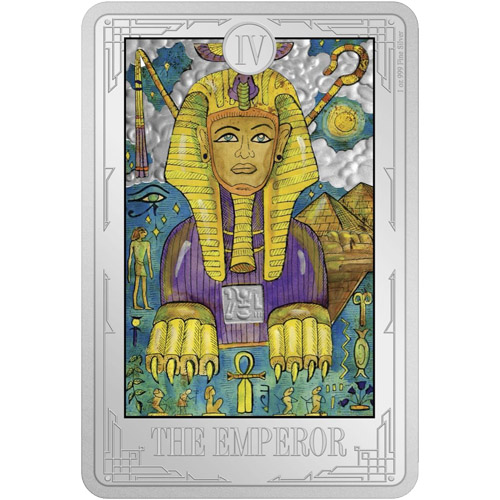 Tarot cards have been in use in society since the 15th century. Developed in France in the Middle Ages, tarot cards were initially used in various countries for a variety of different card games. By the late 18th century, tarot cards became associated with the occult and the practice of divination. In 2021, the New Zealand Mint introduced a series of rectangular silver bullion coins with colorized designs replicating the imagery of tarot cards. Now, 2021 1 oz Silver Niue Tarot Cards The Emperor Coins are available to you for purchase online from Silver.com.

The use of tarot cards arose in the middle of the 15th century in Medieval Europe. The people of France, Italy, and Austria were the most common users of tarot decks to play various card games, such as tarocchini, taro, and Konigrufen. By the 18th century, practitioners of divination and the occult began to use the cards.

Tarot card reading is purportedly used to gain insight into the past, present, and future of an individual. Generally speaking, divination is done by formulating a question and having the target individual cut the deck. The card reader will then draw cards from the deck and interpret the images and their meaning in relation to the individual.

The obverse of the 2021 1 oz Silver Niue Tarot Cards The Emperor Coins features a portrait of Queen Elizabeth II. This depiction is the fourth-generation design from British coins and was designed by Ian Rank-Broadley in 1998. In this design, the Queen wears the Girls of Great Britain and Ireland Tiara on her head.

On the reverse face of 2021 Silver Niue Tarot Cards The Emperor Coin is an image of the Emperor. The fourth card in the Major Arcana deck of tarot cards, the Emperor symbolizes wisdom and power. In this design, the Emperor is reflective of the image of the Sphinx in Egypt.

These 2021 1 oz Silver Niue Tarot Cards The Emperor Coins come with a custom tarot-themed presentation booklet. Included with the booklet is a printed Certificate of Authenticity and a hologram sticker with the unique serial number. Each coin is a rectangular silver bullion piece with bold colorization on the reverse and proof visuals on the obverse reflecting frosted designs and mirrored fields.