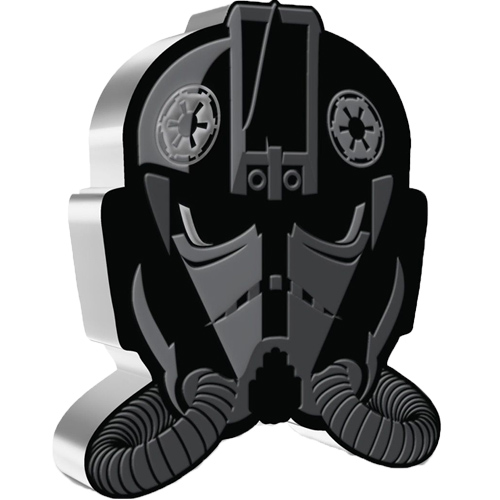 Within the Star Wars universe, there was a well-known cast of characters. Some were good, while others represented the evil intent of The Empire. Among the characters who were anonymous in nature, but also featured throughout the films, were TIE Fighter Pilots. These characters now get proper billing in a new series of silver coins for sale from the New Zealand Mint. Right now, 2021 1 oz Silver Niue The Faces of the Empire TIE Fighter Pilot Shaped Coins are available to purchase online from Silver.com.

Each 2021 1 oz Silver Niue The Faces of the Empire TIE Fighter Pilot Shaped Coin comes to you inside a custom box. These presentation boxes have Star Wars branding and feature the identifying hallmarks on the exterior lid. The box has a viewing window that allows you to view the reverse design without opening the box. Once you do open the box, you’ll find more details on the release, as well as a Certificate of Authenticity. Each box comes with a holographic sticker featuring the individual serial number for the coin within the release.

Faces of the Empire silver coins for sale from the New Zealand Mint launched in 2021. Each coin has a different shape to fit the visual appearance of a different character face from the Imperial Forces. First up in the series was Darth Vader, arguably the most significant Imperial figure. Next came the Imperial Stormtrooper with its iconic white helmet. Now available third in the series is the TIE Fighter helmet.

The obverse of 2021 Silver Niue Faces of the Empire TIE Fighter Pilot Shaped Coins comes with a depiction of Queen Elizabeth II. Designed in 1998 by Ian Rank-Broadley, this effigy was created initially for the Royal Mint and featured on British coins as the fourth-generation portrait of the monarch. It remains a popular design for Commonwealth coins in 2021.

On the reverse of 2021 1 oz Silver Faces of the Empire TIE Fighter Pilot Shaped Coins is an image of the black helmet of a TIE Fighter pilot. Whenever the aerial forces of the Rebellion and the Empire met in the skies, these individuals were behind the yoke of the Imperial TIE Fighter in their iconic black helmets.