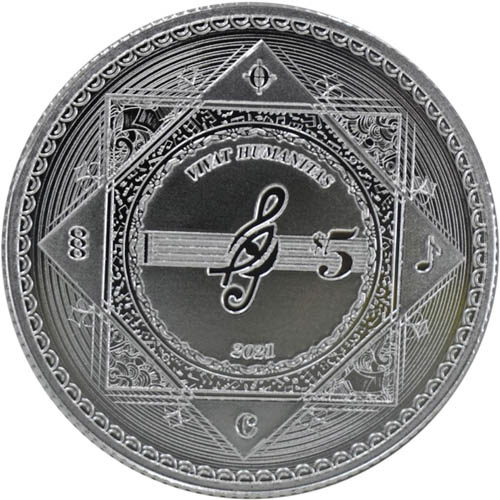 The Latin phrase Vivat Humanitas translates into English as “long live humanity,” a theme that the Pressburg Mint has capitalized on with its Vivat Humanitas Series for the island nation of Tokelau. The collection debuted in 2020 and uses a common central reverse design paired with new imagery celebrating a different aspect of human civilization. Right now, 2021 1 oz Silver Tokelau Vivat Humanitas Coins are available to purchase online at Silver.com.

Each of the 2021 1 oz Silver Tokelau Vivat Humanitas Coins available in this listing comes with a protective plastic capsule. The Pressburg Mint offers two versions for each of its coin design releases, with this option being the Brilliant Uncirculated coin. The Pressburg Mint considers its BU coins to show clean visuals with no enhanced visual brilliance, making it a perfect investment choice.

In the 2021 release of the Silver Vivat Humanitas Series, the Pressburg Mint celebrates the continued advancement of music in human society. The most basic elements of music are featured in both the obverse and reverse design elements of these coins, with musical notes, record grooves, and other elements included in the designs. The primary design focuses on the clef note.

On the obverse of 2021 Silver Tokelau Vivat Humanitas Coins is a depiction of Queen Elizabeth II. Her Majesty is the longest-reigning monarch of England and has been on the throne since her father’s death in early 1952. This particular effigy of the Queen featured on British coins from 1998 to 2015 and was designed by Ian Rank-Broadley. Since 1999, it has been widely used throughout Commonwealth nations.

The reverse face of 2021 1 oz Silver Tokelau Vivat Humanitas Coins comes with a design focused on a stylized G Clef. The clef is a musical symbol that is used in written sheet music to indicate which notes are represented by the lines and spaces on the stave. In this case, one of the four common clefs is featured with a stylized twist that includes a fish at the center. The G Clef, or Treble Clef, is the most common in music and indicates that a note is on the second line and is a G note.

If you have any questions when buying silver, JM Bullion is here to assist. Our team is available on the phone at 800-276-6508, on the web through our live chat service, and via our email address.