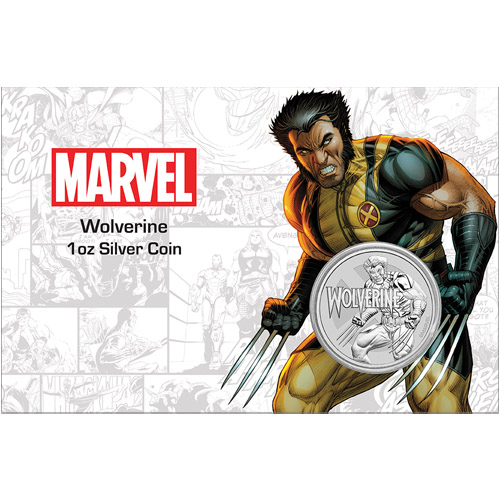 One of the first anti-hero characters introduced by Marvel Comics was Wolverine. Introduced in 1974, Wolverine was a brooding, physical character who was not shy about using deadly force when he felt the situation warranted it. The introduction of Wolverine coincided with a tumultuous period in American history following the Vietnam War that saw an anti-establishment, rebellious cultural revolution. Now, 2021 1 oz Silver Tuvalu Wolverine Marvel Series Coins are available to purchase online at Silver.com.

When the Wolverine character was first devised for comics, he was designed to be mutated from an actual wolverine species, hence the name of the character. Over time, that backstory changed, but the name stuck and was used as a nod to the determination and dogged nature of his character.

Wolverine made his first appearance in an issue of The Incredible Hulk. In release #180, Wolverine appeared during the final panel of the comic. He gained wider visibility in the following release, #181, which was issued in November 1974. Wolverine would go on to feature as a prominent figure in the X-Men, get his own comic, star in X-Men feature films, and even get his own origin-story feature film.

The obverse side of 2021 1 oz Silver Tuvalu Wolverine Marvel Series Coins comes with a right-profile bust of Queen Elizabeth II. Ian Rank-Broadley created this image of Her Majesty for the Royal Mint of England in 1998 and it was used on British coins until 2015. The design was also introduced on the currency of Commonwealth nations in 1999 and remains in use in places such as New Zealand, Niue, Tuvalu, and Tokelau.

On the reverse field of the 2021 Silver Tuvalu Wolverine Marvel Series Coins is an image of Wolverine. The Wolverine figure featured here lacks the mask that often accompanied the character in comic book depictions. However, without the mask, you can see the hairstyle of Wolverine that is meant to reflect the fur patterns of the actual animal species. Included in the design are the powerful adamantium claws that Wolverine uses to dispatch his enemies.

These 2021 1 oz Silver Tuvalu Wolverine Marvel Series Coins are available to you in Brilliant Uncirculated. The coins are housed individually inside of protective capsule cards that include full-color graphics depicting Wolverine in the same design from the reverse of the coin.

Silver.com customer service is available to assist you with questions about silver for sale at 888-989-7223. We are also available online through our live chat and email address features.