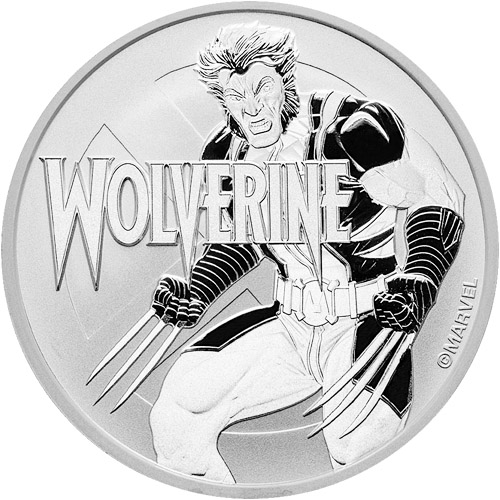 One of the hottest collections from the Perth Mint in recent years has been the Marvel Series of 1 oz silver coins. Released in 2017 with a single design, the biggest year in the collection was 2018 when four designs were released in total. After the planned final design was released in 2019, the popularity of the series resulted in the introduction of a seventh design in 2019, an eighth design in 2020, and now a ninth design in 2021. Today, 2021 1 oz Silver Tuvalu Wolverine Marvel Series Coins are available to you online at Silver.com.

Wolverine was one of Marvel Comics’ first anti-hero characters. Debuting in a 1974 release of The Incredible Hulk, Wolverine was the first in a long line of popular anti-heroes that would emerge in the aftermath of the Vietnam War as comic writers and illustrators tried to capture the attitude of the nation in turbulent times. Wolverine was brooding, powerful, aggressive, and not shy about using deadly force if he felt the situation called for it, a characteristic not common previously among Marvel characters.

All of the 2021 1 oz Silver Tuvalu Wolverine Marvel Series Coins available here are packaged individually or in various different options for multiples. Individual coins arrive in a plastic clip, while multiples are available in sealed rolls of 20, boxes of 100, or boxes of 300. The box of 100 coins offers five rolls of 20, while the box of 300 offers 15 rolls of 20.

Queen Elizabeth II features on the obverse field of 2021 1 oz Silver Tuvalu Wolverine Marvel Series Coins. This design comes from Ian Rank-Broadley and is the fourth-generation design created for the Royal Mint during her reign. The image showcases the Queen wearing what is said to be her favorite tiara among her collection of crowns and tiaras, this one having been gifted to her grandmother, Mary of Teck, upon her marriage to the future King George V.

Wolverine is found in the reverse design element of 2021 Silver Tuvalu Wolverine Marvel Series Coins. Wolverine is a powerful, raw character in the Marvel Universe who has a skeleton made of ultra-strong adamantium. Though he was originally intended to be a character who was a mutated version of the wolverine species, that is not the origin story that ended up gaining traction in the comics or in feature film backgrounds for the character.

Please feel free to reach out to Silver.com if you have any questions about these coins. You can call us on the phone at 888-989-7223, chat with us live online, or email us directly.