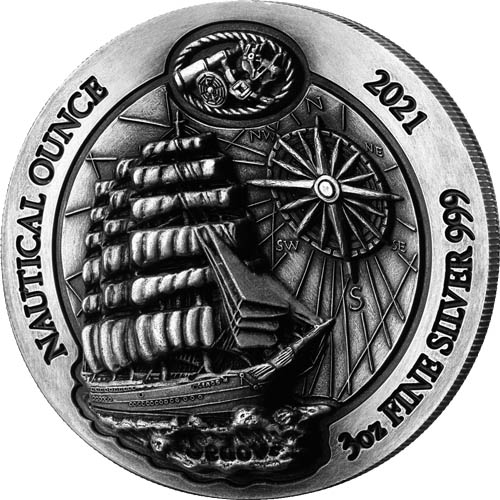 Ships are crucial to the human species for a variety of reasons. We have used them to transport goods, discover new lands, and simply to experience what life is like on the water. There have been many great ships throughout history, each one with its own unique story. One of the all-time greats is the STS Sedov, a German-made barque that was one of the largest operating sailing ships for nearly a century. Today, 2021 3 oz Antique Silver Rwandan Sedov Nautical Ounce Coins are available to you online at Silver.com.

These 2021 Silver Rwandan Sedov Nautical Ounce Coins are delivered to you in plastic capsules and include Certificates of Authenticity issued by the mint. This is the 5th release in the Nautical Ounce series. Each release in this popular collection includes different versions. The one in this listing has an antique finish, which gives it an appealing, vintage aesthetic.

The Sedov first set sail in 1921 out of the Friedrich Krupp Germaniawerft port in Kiel, Germany. While she is known as the Sedov today, initially this four-masted barque went by the name Magdalene Vinnen II. In her early years, she was a cargo ship, carrying everything from coal to wheat all over the globe. In 1936, she was sold to a different German shipping company and renamed Kommodore Johnsen. During this period she became both a cargo and a training ship. Then, in December 1945, she became the Sedov when British forces gave her to Russia for war reparations. Today, this marvelous ship is operated by Kaliningrad State Technical University.

The Sedov is featured on the obverse of 2021 3 oz Rwandan Sedov Nautical Ounce Coins. She is depicted sailing the seas towards the east in stunning detail. The image also includes a compass and various nautical equipment. Inscriptions include the words Nautical Ounce, 2021, 3 oz Fine Silver .999.

The official seal of Rwanda is depicted on the reverse of 2021 3 oz Antique Silver Rwandan Sedov Coins. A basket, a coffee branch, and a sorghum stem are all shown above a cogwheel. Also, you will find Rwandan text that translates to Republic of Rwanda, Unity, Work, Patriotism.

Please contact Silver.com with any questions when you buy silver online. You can call us at 888-989-7223, chat with us live online, or email us directly.