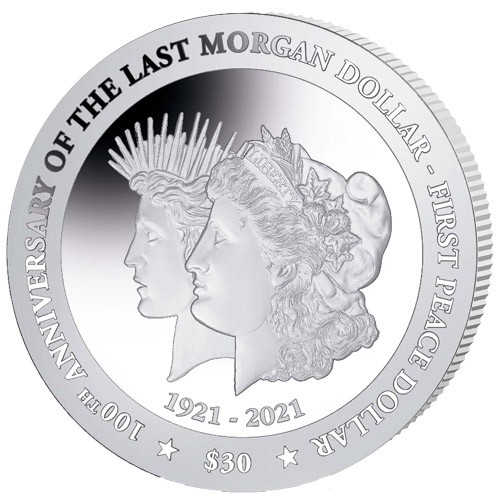 It has been 100 years since a monumental striking of silver dollars in the United States. In 1921, the US Mint reintroduced fresh silver dollars for the first time since 1904. In doing so, it struck two versions of the coin to mark an end to the Morgan Dollar Series and the start of the Peace Dollar Series. Right now, 2021 5 oz Proof Silver British Virgin Islands 100th Anniversary Morgan and Peace Dollar Coins are available to purchase online from Silver.com.

Each 2021 5 oz Proof Silver British Virgin Islands 100th Anniversary Morgan and Peace Dollar Coin in this listing comes with frosted designs and mirror-like fields. The coins are individually housed within presentation boxes and come with a Certificate of Authenticity from the mint.

The obverse of 2021 Proof Silver BVI 100th Anniversary Morgan and Peace Dollars features the effigy of Queen Elizabeth II. Her Majesty is shown in right-profile relief with earrings, a necklace, and the George IV State Diadem on her figure. The inscriptions identify the nation of issue, date, and the monarch’s name.

On the reverse side of 2021 5 oz Proof Silver BVI Morgan and Peace Dollars are the two images of Liberty. Inspired by the final two silver dollar designs in US history, George T. Morgan’s effigy of Liberty is featured in the foreground. Anthony de Francisci created the effigy of Liberty that features in the background.

If you have any questions about these silver coins for sale, please feel free to ask. Silver.com customer service is available at 888-989-7223, online through our live chat, and using our email address.