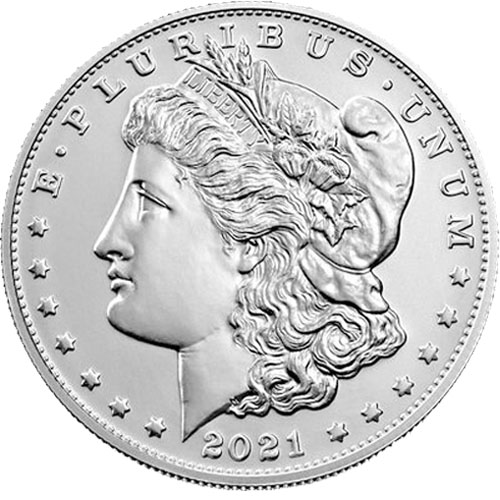 When the United States Mint issued the Silver Morgan Dollars from 1878-1904 and in 1921, a total of five branch mints participated in coining. Though it recorded the third-highest single-year mintage in the program’s history, the Denver Mint’s contribution was still unique in that it struck the coins only one time. That occurred in 1921 during the final year of issue. The US Mint marks the centennial of that event with five silver bullion versions of the Silver Morgan Dollar available to collectors and investors today. Now, 2021-D Silver Morgan Dollar Coins are available to you for purchase online at Silver.com.

When the US Mint introduced the Morgan Dollars in 1878, the Philadelphia, San Francisco, and Carson City Mint issued the coins. In 1879, the New Orleans Mint began issuing the coins as well following a long closure during and after the US Civil War. From 1879 to 1904, the coins were struck by the Philadelphia Mint, San Francisco Mint, and New Orleans Mint every year. Carson City struck the coins until 1885 and again from 1889 to 1893 when it was closed.

In 1904, Silver Morgan Dollar coining ended. The United States would not issue new silver dollars until 1921. When it did, the Morgan Dollar design was revived using all-new dies that were created by then-Chief Engraver George T. Morgan who was still working at the mint 43 years after starting in 1878. The Carson City and New Orleans Mints were long closed at this point. To assist the Philadelphia and San Francisco Mints, the Denver Mint struck the coins for the first and only time in its history.

The obverse of 2021-D Silver Morgan Dollars comes with a left-profile portrait of Lady Liberty. Her effigy is featured here with her hair held up in a Phrygian cap at the back of her head, loose strands of curls down her neck, a coronet and wreath crown in her hair, and 13 stars around the portrait.

On the reverse of 2021-D Silver Morgan Dollar Coins is the heraldic eagle. Also designed by Morgan, this image shows the bald eagle in front-facing relief without the US national shield, but still clutching the arrows of war and the olive branch of peace. The eagle is framed by a wreath around the bottom half of the design.

2021-D Silver Morgan Dollars are protected within capsules and packaged in a black presentation box by the United States Mint. The coins come with a Certificate of Authenticity and bear the “D” mint mark of the Denver Mint on the reverse.