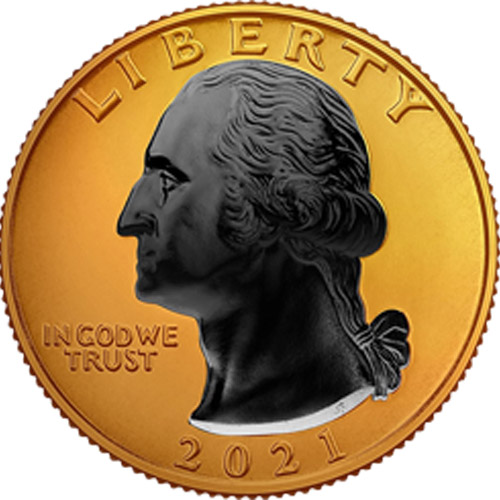 The circulation coins of the United States have been produced with a cupro-nickel alloy since 1964. While the metal content of the coins is no longer of value to precious metals investors, that doesn’t mean the circulation pieces can’t be enhanced in other ways to capture the attention of collectors. Now, 2021 George Washington Zenith Black Ruthenium Quarters are available to you for purchase online at Silver.com.

The current US quarter design from the United States Mint was introduced in 1932. Following the Standing Liberty Series in use from 1916 to 1930, Congress moved to place the first President of the United States of America on the obverse of the coin to mark the 200th anniversary of his birth in 1932.

Since that time, President Washington has continually featured on the obverse of the coin with various reverse designs used over the last nine decades. The most common of these was the front-facing bald eagle design. A bicentennial issue in 1975 and 1975 was also popular. Now, in 2021 a new design is found on the reverse to mark the 245th anniversary of the Crossing of the Delaware by Washington and his Continental Army.

The obverse of 2021 George Washington Zenith Black Ruthenium Quarters features a left-profile bust of President Washington. This image was created in 1932 by John Flanagan and based on a 1786 sculpture of Washington.

On the reverse side of the 2021 George Washington Zenith Black Ruthenium Quarter is the new design. In the foreground, General Washington points the way forward across the Delaware River with his sword as the Continental Army crossed the ice-choked river to launch a surprise attack on the Hessian mercenaries in Trenton, New Jersey.

These 2021 George Washington Zenith Black Ruthenium Quarters have plastic capsules and small stands for display. A Certificate of Authenticity is available with each coin. The entire obverse and reverse of each coin have a 24-karat plating of gold, with Black Ruthenium applied to the design elements on each side.

Silver.com customer service is available to you at 888-989-7223. We are also available online through our live chat and email address features.