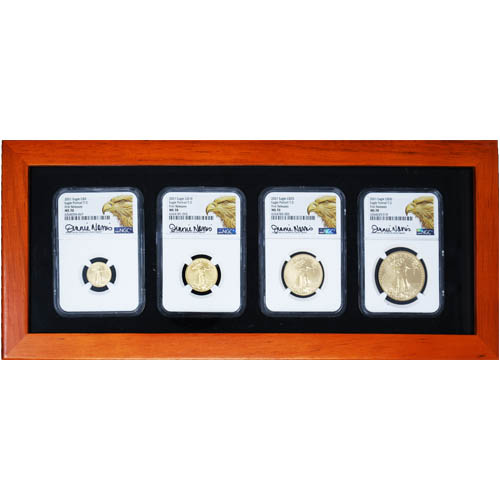 In 2021, the U.S. Mint released the American Gold Eagle coin series in two versions. The first version release featured the famous reverse design by Miley Busiek that’s been in use since 1986. Later in 2021, the United States Mint released the second version of the coin series with a brand-new design by Jennie Norris for the reverse. You can now purchase the 2021 American Gold Eagle 4-Coin Set NGC MS70 FR Type 2 online from Silver.com.

The second version in the 2021 American Gold Eagle coin series introduces a new reverse design by Jennie Norris. Debuting at the beginning of 2021, production for this coin program was not initially ready for the new design. The U.S. Mint successfully transitioned to the second version in July 2021.

The obverse of the 2021 American Gold Eagle 4-Coin Set NGC MS70 FR Type 2 depicts the image of Lady Liberty. Her figure walks forward toward the viewer with sun rays framing her in the background. She holds a torch in one hand and an olive branch in the other. A ring of 50 stars encircles the image of her.

The reverse of the 2021 American Gold Eagle 4-Coin Set NGC MS70 FR Type 2 features Jennie Norris’ new design of an eagle head. The eagle is shown from the left-profile and captures the details of the bird, including the powerful hook of its beak and its piercing gaze.