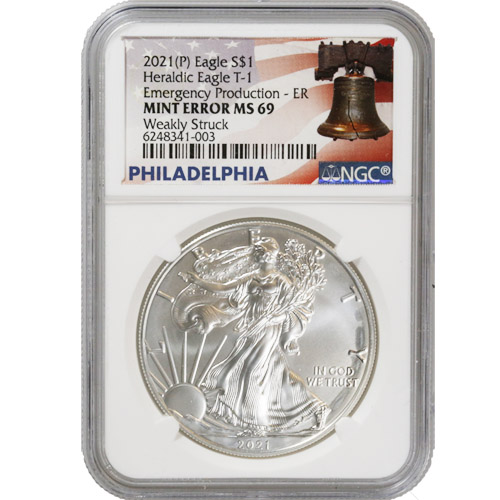 Over a two-week period in early 2020, and again for a brief spell in early 2021, the Philadelphia Mint provided emergency coining assistance to the West Point Mint and San Francisco Mint to ensure a strong supply of the coveted coins amidst continued demand. The Philadelphia-issued Silver Eagles listed here come with Mint Errors present on the coin, a relative rarity among the millions of Silver Eagles the US Mint issues each year. In the case of these particular coins, the Mint Errors were identified as reverse strike-through issues. This indicates that a foreign substance came between the coin blank and the die during the striking process as the reverse design was struck onto the blank.

All of the 2021 (P) 1 oz Silver American Eagles listed here are near-perfect coins graded Mint State 69 by the NGC. Coins in this condition have full, original mint luster and a maximum of two minor detracting flaws. Acceptable flaws at this grade level are limited to minuscule contact marks and hairlines only and must be located outside of the primary focal points of the coin. The included Early Release designation means the NGC received the coins for grading within 30 days of the original release from the US Mint.

On the obverse of 2021 (P) Silver Eagles is a depiction of Walking Liberty. Her effigy is captured in right-profile on the coin as she walks toward the sun on the horizon. This 1916 design from Adolph A. Weinman captures Liberty’s figure with her right hand outstretched, her left carrying branches of oak and laurel, and the American flag draped around her frame.

The reverse side of 2021 (P) 1 oz Silver Eagles includes the heraldic eagle in its final release on BU Silver Eagles. The heraldic eagle was modernized for this series in 1986 by John Mercanti and has been featured on this side every year since that time. Early issues of the 2021 Silver Eagle are the last in the series to feature the iconic national seal.