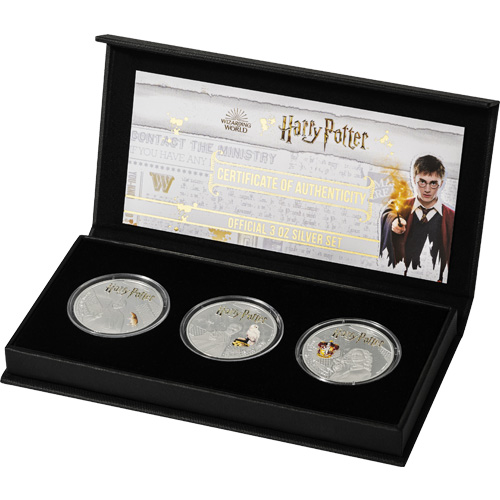 J.K. Rowling’s humble concept of a fantastical wizarding world that coexists alongside the muggles of the world has grown from a series of seven books to include an eight-part feature film franchise, theme park attractions, spin-off movies, and now, silver bullion coins. Countless Harry Potter-themed silver collections have been released in recent years, and the latest comes from the nation of Samoa. Today, 2021 Proof Silver Samoa Harry Potter 3-Coin Sets are available to you online at Silver.com.

The fantasy novels written by J.K. Rowling were first released in 1997 with a total of seven books written and published in the decade ending in 2007. Shortly after the release of the first several novels, a feature-film adaptation was launched that hit theaters in 2001. Between 2001 and 2011, eight films were produced and released, with the final novel from 2007 split into two feature film released in 2010 and 2011. As of 2016, the Harry Potter franchise had an estimated value of $25 billion.

All of these 2021 Proof Silver Samoa Harry Potter 3-Coin Sets are available to purchase with the coins individually encapsulated and set together within a three-coin black presentation box. A Certificate of Authenticity is available with each set. The coins in this set are proof specimens with frosted designs and mirrored fields. Additionally, there is a selective application of colorization on the reverse ofe ach coin.

On the obverse of 2021 Proof Silver Samoa Harry Potter coins in this three-coin set, you will find the 1998 portrait of Queen Elizabeth II. This popular design has been in production for more than two decades now and was initially created by Ian Rank-Broadley for the Royal Mint of England, though it has subsequently been used by several mints for the production of coins throughout the Commonwealth.

The reverse of each coin in the 2021 Proof Silver Samoa Harry Potter 3-coin Set features a different main character from the film franchise. Harry Potter features with his owl and a colorized stack of books, Hermione Granger is depicted alongside the colorized House Gryffindor crest, and Ron Weasley is shown with his pet rat, which is colorized.

Please contact Silver.com if you have any questions. You can reach our team at 888-989-7223, chat with us live online, or email us directly.