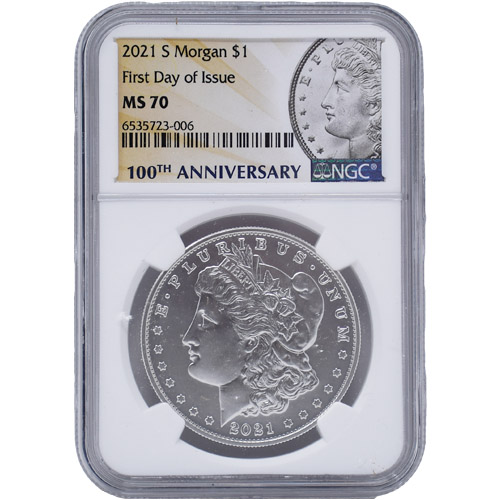 In the first year of issue for Silver Morgan Dollars in 1878, three mints contributed to the production of the coins. The Philadelphia Mint issued more than 10 million coins. The Carson City Mint produced a relatively scant 2.12 million coins that same year. The San Francisco Mint, which opened in 1854, also produced the coins, striking a total of 9.774 million coins.

Fast forward 43 years to 1921 and the final issue of Morgan Dollars, the San Francisco Mint was there to once again issue the coins. In 1921, San Francisco struck and issued 21.695 million of the silver dollars. This completed San Francisco’s contribution to the series as one of two mints to strike the coins every year from 1878 to 1904 and once again in the one-time 1921 release.

The obverse of 1921-S Silver Morgan Dollars features an effigy of Lady Liberty. This portrait shows her head in left-profile relief with a Phrygian cap on top and her hair held back out of her face by a laurel wreath and a coronet crown.

On the reverse of the 1921-S Silver Morgan Dollar is a depiction of the heraldic eagle of the United States. This design shows a front-facing bald eagle with spread wings and the arrows of war and the olive branch of peace in its talons.

These 2021-S Silver Morgan Dollars are available to you in perfect condition. Each coin is housed in a plastic slab with a Mint State 70 grade that indicates a coin with full, original mint luster and no flaws. The First Day of Issue label is for coins received for grading within 24 hours of release from the mint.

Silver.com customer service is available to you at 888-989-7223. Alternatively, you can chat with us live online or simply send us an email with your inquiries.