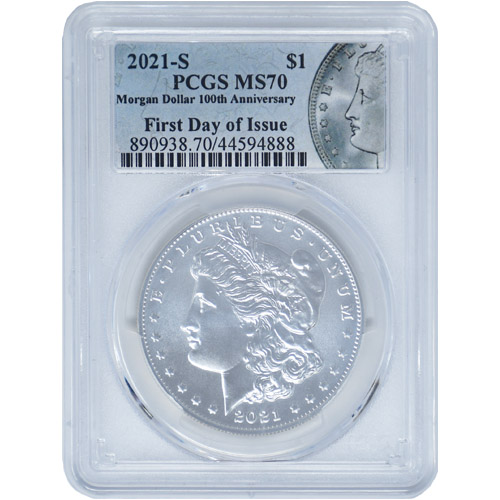 The San Francisco Mint was one of the primary contributors to the production of Silver Morgan Dollars. The coins were originally issued from 1878 to 1904 and one more time in 1921. To celebrate the centennial of that final release, the US Mint issued 2021-dated Morgan Dollars in a silver bullion release. Now, certified-perfect 2021-S Silver Morgan Dollars are available to you for purchase online from Silver.com.

The San Francisco Mint issued Silver Morgan Dollars every year during the coin’s production run. Silver Morgan Dollars were introduced in 1878 after a five-year hiatus in silver dollar coining that brought the Seated Liberty Dollar series to an end. The coins were issued annually by the US Mint through 1904.

In 1905, the mandate from Congress for the US Mint to issue the Silver Morgan Dollar ended, and no more coins were issued starting that same year. The next silver dollar would not be authorized until after World War I and would not be struck until 1921. With all the original dies gone, now US Mint Chief Engraver George T. Morgan had to remake his dies and designs from 1878 for the final release of the silver dollars that bore his name.

The obverse of 2021-S Silver Morgan Dollars comes with a left-profile portrait of Lady Liberty. This image shows Liberty wearing a Phrygian cap with the laurel wreath and coronet crowns in her hair.

On the reverse side of 2021-S Silver Morgan Dollars is an image of the heraldic eagle of the United States. Created by Morgan in 1878, it shows the bald eagle in front-facing relief as it holds the arrows of war and the olive branch of peace in its talons. This side of the coin comes with an S mint mark from the San Francisco Mint.

These 2021-S Silver Morgan Dollars are available to purchase with a Mint State 70 grade and a plastic slab. These perfect specimens showcase full, original mint luster with no detractions present on the coins. First Day of Issue is a label for coins received by the PCGS for grading within 24 hours of release from the mint.

Silver.com customer service is available to you at 888-989-7223. Alternatively, you can chat with us online or email us directly.