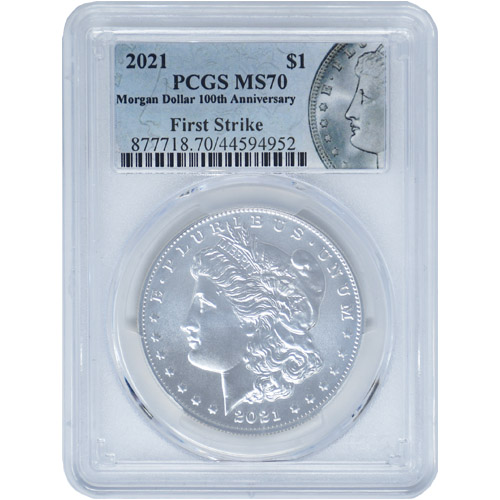 Silver Morgan Dollars were issued in 1878 after a five-year hiatus in the coining of silver dollars in the United States. Millions of the coins were issued between 1878 and 1904, with a massive number of coins issued in 1921 after a 17-year break in the early 20th century. In fact, the Philadelphia Mint alone issued 44.69 million Morgan Dollars in 1921.

By December 1921, the Morgan Dollar was replaced by the Peace Dollar, bringing an end to a coin that had been circulating in the United States for more than four decades at that point. To honor the centennial of that final 2021 release, the US Mint has one version of the 2021 Silver Morgan Dollar available for the Philadelphia, San Francisco, Carson City, New Orleans, and Denver Mints. These mints all originally struck the coins at one point in time. The Philadelphia Mint not only issued the coins in this listing, which lack a mint mark, but also issued the commemorative O privy and CC privy coins for the defunct New Orleans and Carson City Mints.

The obverse of 2021 Silver Morgan Dollars comes with the left-profile portrait of Lady Liberty. In this portrait, she wears a Phrygian cap, laurel wreath, and coronet crown. On the reverse of the 2021 Silver Morgan Dollar Coin is a depiction of the heraldic eagle, a front-facing bald eagle that clutches the olive branch of peace and the arrows of war.

These 2021 Silver Morgan Dollar Coins are available to purchase in Mint State 70 condition with a plastic slab. The PCGS issues this grade to coins that showcase full, original mint luster and come with no flaws. First Strike coins are those received for certification within 30 days of release from the mint.

Silver.com customer is available at 888-989-7223. Alternatively, you can contact us on online using our live chat and via our email address.