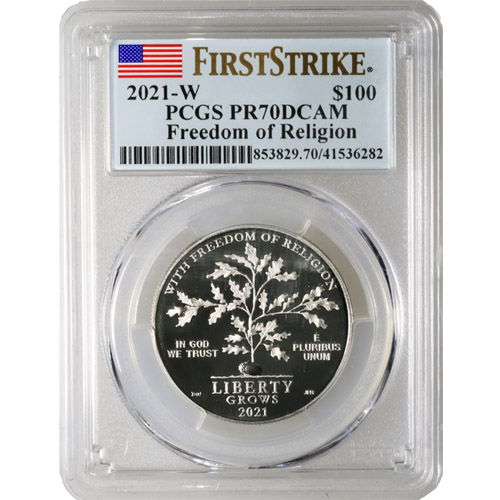 There is only one platinum bullion coin series available from the United States. Its proof version, ideal for collectors, just happens to be the only coin in the American Eagle Series that features new design elements each year as well. From 1997 to 2017, it was the reverse that got a new design each time. Starting in 2018, the obverse side gained new designs each year. In 2021, a new design series starts with five new obverse images planned. Now, 2021-W 1 oz Proof Platinum American Eagles in perfect condition are available to you for purchase online at Silver.com.

The Proof Platinum Eagles have been available every year since 1997, with the 1 oz coin the only one issued each year since that time. From the beginning of the series, the US Mint issued the coins with new design elements on one side. The Statue of Liberty featured on the obverse of the coins from 1997 to 2017, with new depictions of the American bald eagle, Liberty, or other symbols of Americana on the reverse.

Starting in 2018, the US Mint abandoned the Statue of Liberty design on the obverse in favor of new elements each year. The 2018-2020 release featured new obverse depictions celebrating the Preamble to the Declaration of Independence. Now, the 2021 series starts a new five-coin release with fresh obverse designs celebrating the First Amendment to the United States Constitution. In the first release, the Freedom of Religion is celebrated with the birth of the Liberty tree.

The obverse of the 2021-W 1 oz Proof Platinum American Eagles features a depiction of an acorn on the ground. This acorn marks the birth of the Liberty tree, the powerful oak is but a sapling in this design, one that will be nurtured by the freedoms guaranteed in the First Amendment to grow into a mighty tree.

On the reverse side of 2021-W Proof Platinum Eagles is the new static design element in the series. The image of an American bald eagle descending into view with an olive branch in its talons. The eagle’s wings swoop around its figure as it descends into the design element.

These 2021-W 1 oz Proof Platinum American Eagles are in perfect condition. PR70 coins showcase full, original mint luster and have no flaws. The First Strike label indicates specimens that were received for grading within 30 days of the initial release.

Silver.com customer service is available to assist you on the phone at 888-989-7223. Our team is also available to you online through our live chat and email address features.