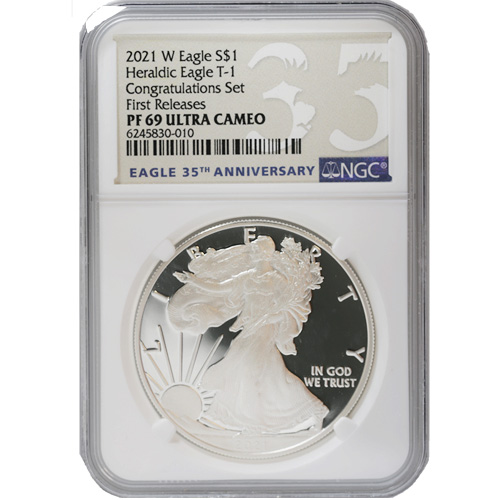 The United States Mint issues its popular Proof Silver Eagles each year for collectors to purchase. While most are sold individually inside of US Mint displays, small numbers are allotted each year to the Congratulations Set. This annual release comes with a presentation card that includes “Congratulations” on the cover and is intended for gift-giving by coin enthusiasts. Now, 2021-W 1 oz Proof Silver American Eagle 35th-Anniversary Congratulations Coins are available to you for purchase online at Silver.com.

2021 marks the last release in the Proof Silver Eagle Series with the heraldic eagle design. In use on the coins since 1986 when John Mercanti developed the image for the debut of the Silver Eagle Series. However, as the series reaches its fourth decade in production and celebrates its 35th anniversary, the US Mint has opted to release a new design on the reverse.

By mid-2021, all Silver American Eagles will debut a new image of the bald eagle on the reverse. This is the first time a major design change has come to the series and will be the first-ever dual release by the US Mint. From the early release of the coins until summer 2021, this original design combination will feature on the coins. After mid-2021, the new reverse will be struck on the coins.

The obverse of 2021-W 1 oz Proof Silver American Eagles features a depiction of Walking Liberty. The Walking Liberty design comes from Adolph A. Weinman and was originally used on the US Half Dollar until from 1916 to 1947.

On the reverse side of the 2021-W Proof Silver Eagle is a vision of the heraldic eagle. First released by the US Mint in 1794, this national emblem comes with an image of the bald eagle in front-facing relief as it supports the national shield. The eagle clutches the olive branch of peace and arrows of war.

These 2021-W 1 oz Proof Silver American Eagle 35th-Anniversary Congratulations Set coins are near-perfect specimens. Coins in PF69 condition showcase full, original mint luster and come with a maximum of two minor detracting flaws. Examples of those flaws include only minuscule contact marks or hairlines. These flaws must be located outside the primary focal points. UCAM labels are for proof coins with strong, frosted designs and deeply-mirrored background fields. First Release coins were received by the NGC within 30 days of issue by the mint. We would like you to note that these coins are not in the Congratulations Set cards, but are securely packaged in an NGC slab.