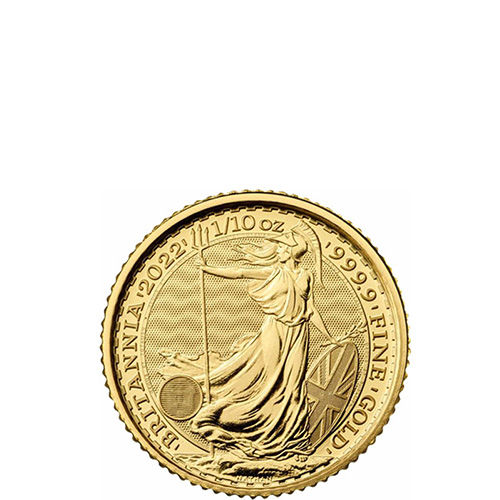 The Gold Britannias from the Royal Mint continue a coining tradition that dates back to the late 17th century. Since that time, one figure has remained a constant on the fields of British currency: Britannia. Since 1987, she has featured as one of the faces of the United Kingdom in the modern era on the Gold Britannia Series. Now, 2022 1/10 oz Gold British Britannias are available to you for purchase online at Silver.com.

Gold Britannias are like many other major gold bullion coin programs. The coins are issued each year by the sovereign mint of the United Kingdom, the Royal Mint of England. The coins feature the same obverse and reverse designs each year, with only the effigy of the monarch on the obverse side changing over the course of time.

The image of Britannia that features on the reverse of the coins each year may be a modern creation, but it is based on thousands of years of British history. The first effigy of Britannia appeared on a coin stamped in Britain in 79 A.D. when the Roman Empire ruled the British Isles and Hadrian was emperor. Since the late-17th century, Britannia has been a fixture of British coinage on an annual basis.

The obverse of the 2022 1/10 oz Gold Britannias comes with a vision of Queen Elizabeth II. Her Majesty is shown here in right-profile relief in the fifth-generation design from Jody Clark. Created in July 2015, it shows Elizabeth II at the age of 89 wearing the George IV State Diadem Crown on her head.

These 2022 1/10 oz Gold British Britannias are available to you individually in plastic flips or acrylic tubes of 25 coins. Each one of the coins comes in Brilliant Uncirculated condition.