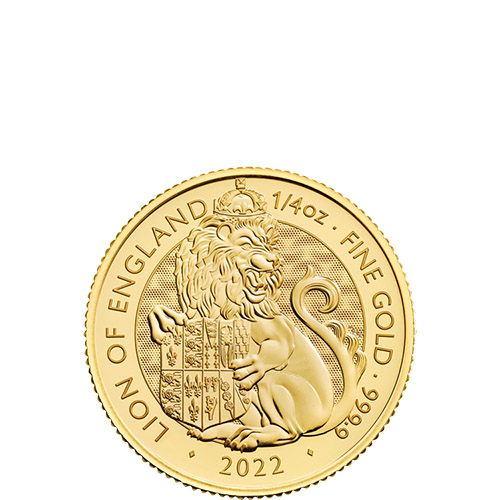 The monarchy in England has been around for more than 1,000 years and can trace its rulers back to the 8th century and the scattered kingdoms of England battling the invading Danes. While the previous Queen’s Beast Series celebrated the many heraldic beasts used by monarchs from the Plantagenets to the Hanoverians, the new Tudor Beasts Series celebrates one of England’s most infamous ruling families. Now, 2022 1/4 oz Gold British Tudor Beasts Lion Coins are available to you for purchase online from Silver.com.

The Tudor Dynasty was founded in 1485 by Henry Tudor, who would go on to rule as King Henry VII. He had previously led the House of Lancaster in the final years of the Wars of the Roses against the House of York. Control of the throne of England had wavered back and forth between the Lancastrians and Yorkists throughout the 15th century.

With his victory over the Yorkist monarch King Richard III, King Henry VII married Elizabeth of York to cement his legitimacy on the throne. He ruled as the first monarch of the Tudor Dynasty before his son, Henry VIII ascended the throne and went on to become one of the most infamous monarchs in English history. The Tudor Dynasty ended in 1603 with the death of Henry VIII’s daughter, Queen Elizabeth I. Her reign is widely considered a golden age for England.

The obverse of 2022 1/4 oz Gold Tudor Beasts Lion Coins features a right-profile portrait of Queen Elizabeth II. Her Majesty is the longest-reigning monarch in English history, and by a wide margin. This portrait of the Queen was created in 2015 by Jody Clark and is the fifth-generation portrait used on coinage during her reign.

On the reverse side of the 2022 Gold Tudor Beasts Lion Coins is a depiction of the Lion of England, the most important heraldic beast in the nation’s history. The crowned lion is seated by a shield with the impaled arms of King Henry VIII and his third wife, Jane Seymour.

These 2022 1/4 oz Gold British Tudor Beasts Lion Coins are available individually in flips. Multiples come in plastic tubes of 25 coins or Monster Boxes of 500 coins. All of the coins are in Brilliant Uncirculated condition. The Lion of England design is the first BU coin release in the Tudor Beasts Series.