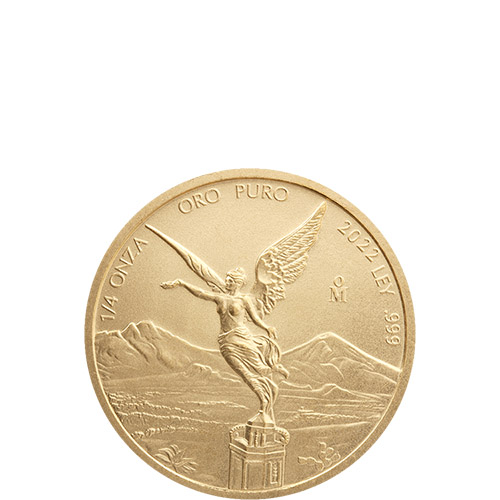 The history of the Gold Mexican Libertad is a rich one that has several starts and stops in production. The 1981 release featured only the 1 oz, 1/2 oz, and 1/4 oz gold coins and, though it was the debut of the series, it was the only release for a decade. The next release of the coins came in 1991.

When the collection returned in 1991, the series expanded with more fractional-ounce gold weights. The coins were then struck through 1994, halted from 1995 to 1999, issued in 2000, halted again in 2001, and finally restarted in 2002. Since the 2002 restart, the series has only missed the 2012 date mark and this only impacted the fractional-ounce coins.

The obverse of 2022 1/4 oz Gold Mexican Libertads features the national coat of arms. Mexico’s coat of arms depicts a Mexican golden eagle in left-profile relief as it sits on a prickly pear cactus. The eagle uses its powerful talons and beak to control a serpent it is battling with. The wreath below the eagle is made of oak and laurel, with the nation of issue engraved above.

On the reverse side of the 2022 Gold Libertad comes with a depiction of Winged Victory. The statue of Winged Victory is set at the top of the Mexican Independence Victory Column. Her effigy became popular during the independence movement. The design shows Victory in three-quarter-profile relief with a laurel wreath crown in her right hand and a set of broken chains in her left.

These 2022 1/4 oz Gold Mexican Libertads are available to you in Brilliant Uncirculated condition. The coins are delivered with plastic flips and boast low mintages in the last several years. The most recent release in 2021 featured a mintage of 500 coins.