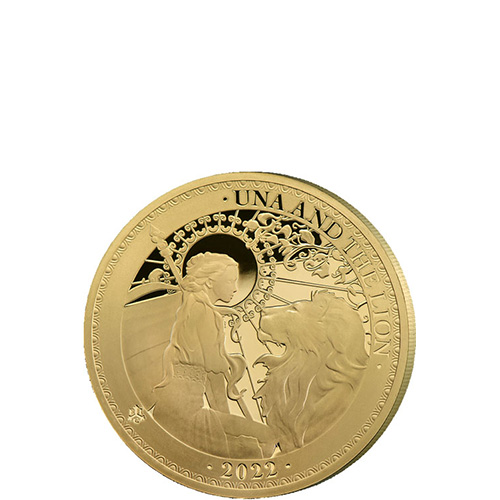 The story of Una and the Lion is one that is deeply connected to the throne in England. The original poem was written in 1589 by Edmund Spenser and its very first copy was presented to Queen Elizabeth I that same year, while the concept of Una and the Lion was used in a groundbreaking Royal Mint coin design more than 200 years later during the reign of Queen Victoria. In the 21st century, the Issuing Authority of St. Helena and the East India Company have revived this captivating design concept in an ongoing bullion release. Now, 2022 1/4 oz Proof Gold St. Helena Una and the Lion Coins are available to you for purchase online from Silver.com.

In 1589, Edmund Spenser completed the first three books of what would eventually be known as the epic poem, The Faerie Queene. That same year, he presented the books to Queen Elizabeth I and was granted a pension for life. That pension amounted to a total of 50 Pounds per year for life.

In 1839, the Royal Mint and William Wyon teamed up to create a new gold coin design in honor of the first anniversary of Queen Victoria’s official coronation as Queen of England. The 1839 coin was a 5 Pound gold piece with Queen Victoria’s bust on the obverse, and a vision of her as Una from the historic poem on the reverse. This marked the first time in British history a monarch was depicted as a fictional character on national coinage.

The obverse of the 2022 Proof Gold Una and the Lion Coins features a portrait of Queen Elizabeth II. England’s longest-reigning monarch, Elizabeth II is shown here in right-profile relief wearing the George IV State Diadem Crown. The portrait of the Queen shown here was created in 2015 by Jody Clark.

On the reverse of each 2022 1/2 oz Proof Gold Una and the Lion Coin is an image of two of the primary characters from The Faerie Queene. Here, we see Una seated on the left of the field as the lion is seated to the right side of the design. The pair are gazing at one another in this powerful, yet peaceful design.

These 2022 1/4 oz Proof Gold St. Helena Una and the Lion Coins come with acrylic capsules and an East India Company display box. The box includes a pop-up base that allows you to display the coin upright within the box. All coins are proof specimens with frosted designs and mirrored fields.

Silver.com customer service is available at 888-989-7223. Additionally, you can chat with us live online or simply send us an email with questions when buying gold. 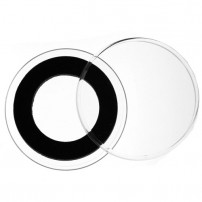