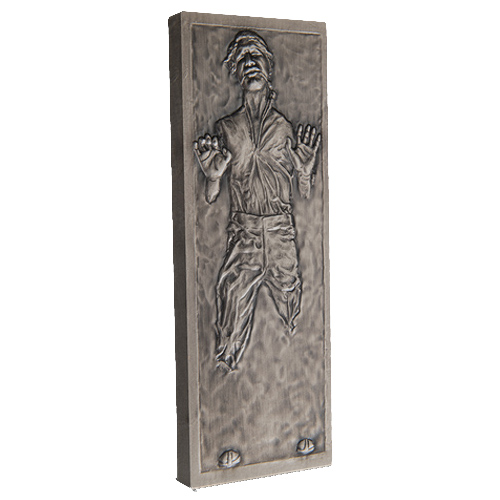 The freezing of Han Solo in carbonite is a classic moment in the Star Wars franchise, a deed of the villainous Darth Vader as famous in its own right as the iconic “I am your father” line. The New Zealand Mint pays tribute to this key moment in The Empire Strikes Back in the form of a truly standout entry among its Star Wars Collectibles, the 2022 1 oz Silver Antique Niue Han Solo in Carbonite Coin now on offer from Silver.com.

The 2022 Silver Antique Niue Han Solo in Carbonite Coin is an exclusive limited mintage of an extraordinary coin design that you’ll want to order early, as it’s certain to be prized among fans, collectors, and investors. Featuring a unique rectangular slab shape and a gorgeous antique finish, it comes in a windowed, Star Wars-branded box for display, nestled in black velvet and with a Certificate of Authenticity that identifies its unique number in the mintage. Silver.com insures all shipments fully against any possible loss or damage.

The Empire Strikes Back was the second Star Wars film to see a cinematic release and furnished the memorable scene that this coin captures. Roguish hero of the Rebellion Han Solo, portrayed by Harrison Ford, runs afoul of the Galactic Empire and a bounty hunter named Boba Fett who seeks to surrender him to his old enemy and former boss Jabba the Hutt. The forces of evil freeze him in carbonite as a way of testing the procedure for an even more sinister usage against his friend, Luke Skywalker. In an unexpected twist, he would remain frozen by the film’s end and would have to be rescued in its sequel.

The coin’s obverse side is a miniature replica of the original prop of Han Solo in carbonite, sculpted in exquisite detail to match an effect that was first created using a combination cast of Harrison Ford’s face and a body double’s arms, torso and feet.

On the reverse is Ian Rank-Broadley’s classic profile portrait Queen Elizabeth II, joined by the inscriptions “Elizabeth II,” “Niue,” “Two Dollars,” and “2022.” At the bottom edge, it verifies “1 oz 999 Fine Silver” and includes the Lucasfilm Ltd. trademark and copyright.

Silver.com’s customer service team is standing by to answer your questions about silver for sale. Call us at 888-989-7223, send an inquiry by e-mail, or reach out to our online live chat.