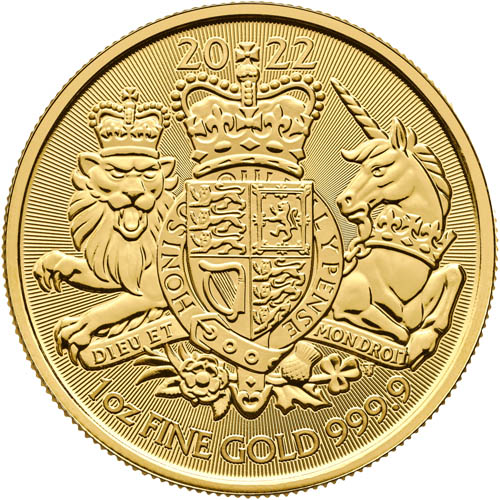 The gold coins for sale in the British Royal Arms Series have been available since 2019. The collection launched that year with 1 oz silver and 1 oz gold coins. In 2020, the series expanded with the introduction of 1/10 oz gold, 10 oz silver, and 1 oz platinum options. Today, 2022 1 oz Gold British Royal Arms Coins are available to you online at Silver.com.

In 1198, King Richard I gave England a seal that would become the first officially recognized Royal Arms of England. Though shields and seals bearing one or two lions had been a part of English symbolism since the Anglo-Saxons and Danes competed for control of the Isles, it was the Plantagenet monarch, King Richard I, whose Three Lions emblem became the first official Royal Arms.

On the obverse of 2022 Gold British Royal Arms Coins is an effigy of the reigning monarch, Queen Elizabeth II of England. Her Majesty has been on the throne as Queen of England since 1952 and has set countless records along the way, including becoming the first monarch ever to mark a Platinum Jubilee for 70 years on the throne. This bust is a right-profile relief that was created in 2015 by Jody Clark.

The reverse side of 2022 1 oz Gold Royal Arms Coins comes with Timothy Noad’s depiction of the Royal Arms of England. The design focuses on a quartered shield with the English coat of arms in the first and fourth quadrants, the Scottish coat of arms in the second, and a symbol of Northern Ireland in the third. This is all topped by the Imperial Crown and supported by both the Lion of England and the Unicorn of Scotland.