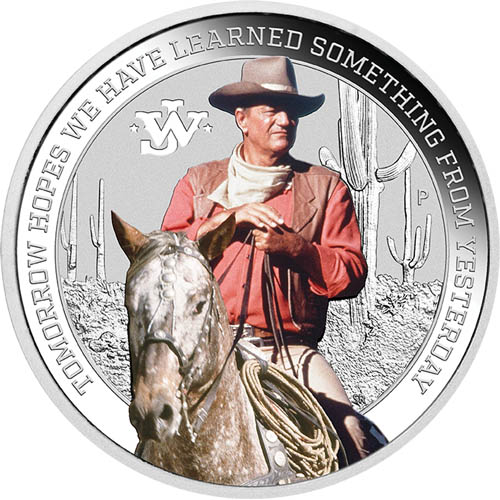 Hollywood has produced a number of superstar actors who have gone on to become household names. From the silent era to the modern-day, these actors have become familiar faces in American culture, and few of them loom large over cinema than John Wayne. An icon of cinematic Westerns who also had leading roles in war films, John Wayne is synonymous with the film industry in America. Now, 2022 1 oz Colorized Silver Tuvalu John Wayne Coins are available to you for purchase online at Silver.com.

John Wayne was born on May 26, 1907, in Winterset, Iowa. Born as Marion Robert Morrison, he eventually took on the stage name of John Wayne. At some point in his career, he simply became known as the Duke. His path to stardom in feature films was, like that of many actors, a strange one.

Born in Iowa, Wayne actually grew up in Southern California. Were it not for a bodysurfing accident in his youth, he may have been better known to Americans as a football player. He had earned a scholarship to play football at USC, but his accident resulted in the loss of that scholarship. Instead of football, he began working at the Fox Film Corporation.

The obverse of 2022 Colorized Silver John Wayne Coins features Her Majesty, Queen Elizabeth II. The Queen is shown here in right-profile relief with the Girls of Great Britain and Ireland Tiara on her head. This design was created initially for the Royal Mint and was designed by Ian Rank-Broadley in 1998.

On the reverse side of 2022 1 oz Colorized Tuvalu John Wayne Coins is an effigy of the Duke. He is shown here wearing Western gear and riding on horseback through terrain that is dotted by cacti in the background. Wayne’s career in film started in the 1920s during the silent era, with most of his early roles being small parts. His first lead role came in the 1930 film The Big Trail.

These 2022 1 oz Colorized Silver Tuvalu John Wayne Coins come to you with plastic capsules and are set in beautiful wooden cases. The timber, wooden box has Wayne’s JW initials branded on the exterior lid and has a black interior setting to hold the coin. Each case arrives in an illustrated shipper with a Certificate of Authenticity.

Silver.com customer service is available at 888-989-7223. Additionally, you can chat with us live online or email us directly with questions when you buy silver.