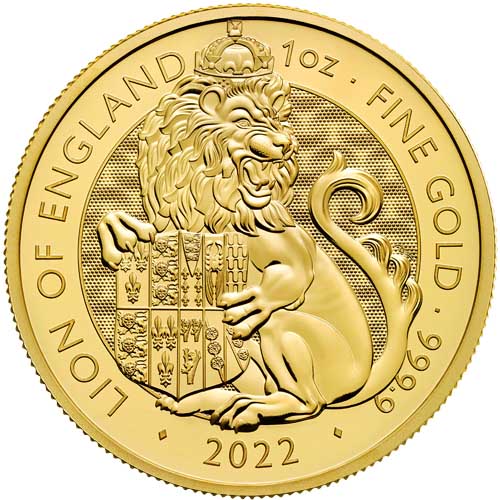 The Royal Mint recently concluded its Queen’s Beast Series, a popular celebration of the various heraldic beasts used in the personal badges and Royal Arms of various monarchs. The new Tudor Beasts Series is a similar celebration of English history that is rooted in the House of Tudor dynasty. Right now, 2022 1 oz Gold British Tudor Beasts Lions are available to purchase online at Silver.com.

The Tudor Dynasty started with Henry Tudor, the victor of the Wars of the Roses between the House of Lancaster and the House of York. He succeeded the last Yorkist monarch, King Richard III, following the latter’s death in battle against Henry Tudor’s forces. The Tudor Dynasty ruled from 1485 to 1603 and featured larger-than-life monarchs, including King Henry VIII and his daughter, Queen Elizabeth I.

The obverse of 2022 Gold Tudor Beasts Lion Coins comes with an effigy of Queen Elizabeth II. England’s longest-reigning monarch, Elizabeth II is shown here in right-profile relief wearing the George IV State Diadem Crown. Created in 2015 by Jody Clark, this portrait shows the Queen at the age of 89.

On the reverse side of 2022 1 oz Gold Tudor Beasts Lion Coins is a depiction of the Lion of England, the oldest heraldic beast associated with the monarchy. The Lion of England was first featured in the personal seal of King Richard I and became part of the Royal Arms by 1198. Here, the crowned Lion of England supports a shield that features the impaled, or combined, arms of King Henry VIII and Jane Seymour.

If you have any questions about these 1 oz gold coins, please feel free to ask. Silver.com customer service is available at 888-989-7223, online using our live chat, and via our email address.