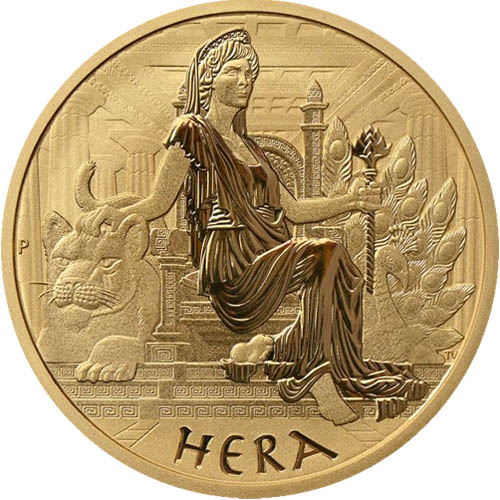 New from the Perth Mint 2020, the Gods of Olympus Series revives popular designs that were previously used in two separate three-coin releases from Perth Mint in 2014 and 2015. The series restarted in 2020 with the image of Zeus, before featuring his brothers Poseidon and Hades in 2021. 2022 starts with the depiction of Zeus’ wife, Hera, the first goddess to feature in the new collection. Now, those 2022 1 oz Gold Tuvalu Gods of Olympus Hera Coins are available to you for purchase online at Silver.com.

The obverse of each 2022 Gold Gods of Olympus Hera Coin features an effigy of Queen Elizabeth II. This design was created in 1998 for the Royal Mint of England by Ian Rank-Broadley. It shows the Queen in right-profile relief wearing the Girls of Great Britain and Ireland Tiara.

On the reverse side of 2022 1 oz Gold Tuvalu Hera Coins is an image of the Queen of Olympus. Hera is married to Zeus and is the protector of women in marriages, as well as a symbol of fertility to women. Hera is known for loyally standing by her husband in spite of his many affairs with mortal women.

These 2022 1 oz Gold Tuvalu Gods of Olympus Hera Coins are available to you individually in plastic capsules. Each gold coin is in Brilliant Uncirculated condition and comes with a Certificate of Authenticity.