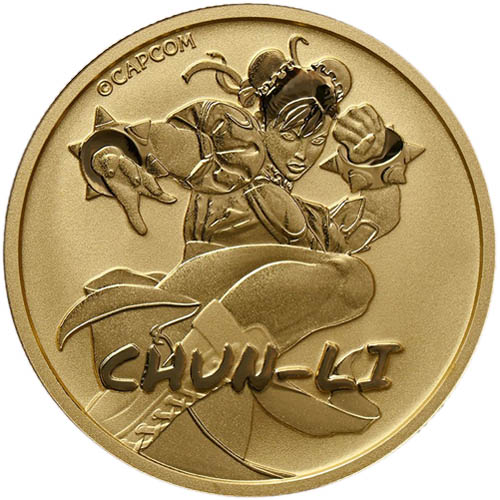 The Street Fighter Characters series was launched by the Perth Mint in 2021, celebrating one of history’s most iconic gaming franchises whose vivid and eccentric roster of heroes and villains helped to pioneer the entire fighting-game genre. One of the most recognized characters in the Street Fighter pantheon is the supernaturally-skilled and unfailingly brave Chun-Li, now commemorated in an exclusive limited issue of the 2022 1 oz Gold Tuvalu Street Fighter Chun Li Coin.

There is probably no more iconic female character in video games than Chun-Li, a pioneering protagonist of Capcom’s sprawling Street Fighter franchise. The first warrior woman on the roster, she’s part of a trio of the game series’ chief protagonists and is particularly known for her feud with the menacing M. Bison, who leads the ranks of the franchise’s villains. Known for her lightning-speed kicks and appealing character design, this perennial fan-favorite character provides the second entry in the Street Fighter Characters series.

The 2022 Gold Tuvalu Street Fighter Chun Li Coin is available in an extremely exclusive limited mintage of only a hundred coins worldwide, so fans of the games and enthusiasts of fine gold coinage will need to order early. Silver.com provides this coin in a brilliant uncirculated finish with near-flawless quality and rich luster, and ships it with a Certificate of Authenticity in its own protective plastic capsule. We fully insure every shipment.

A profile portrait of Queen Elizabeth II appears on the coin’s obverse side as it’s seen on standard coins from all over the British Commonwealth. It’s accompanied by the inscriptions “Queen Elizabeth II,” “1 oz 9999 Gold,” “2022,” “Tuvalu” and “100 Dollars.”

Chun-Li dominates the coin’s reverse, shown in the midst of throwing a kick, and is joined by a foreground inscription of her name along with Capcom’s copyright.

Silver.com is here to answer your questions about gold for sale. You can reach us by phone at 888-989-7223, via our live online chat, or by sending an inquiry via e-mail.