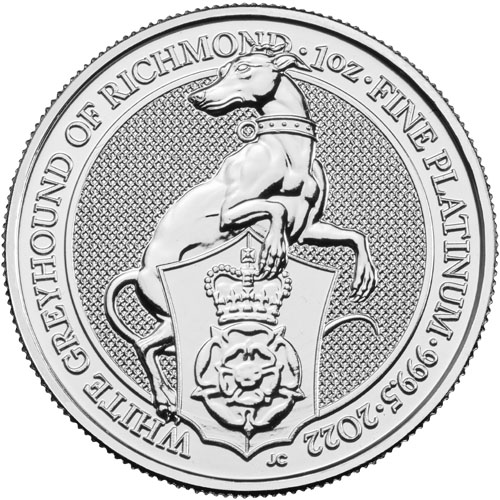 The obverse of 2022 Platinum British Queen’s Beast White Greyhound Coins features a portrait of Queen Elizabeth II. Her Majesty is shown here in right-profile relief in a 2015 design from Jody Clark. The effigy of the Queen shown here is the fifth-generation one to feature on British coins and shows Elizabeth II wearing the George IV State Diadem.

These 2022 1 oz Platinum British Queen’s Beast White Greyhound Coins are available in Brilliant Uncirculated condition. Individual platinum coins in this release ship in plastic flips, with multiples of 10 in plastic tubes and multiples of 100 in boxes. The box holds a total of 10 tubes of 10 coins each.