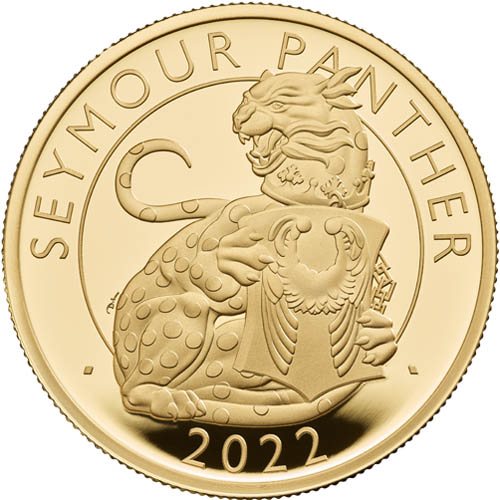 The first release in the new Tudor Beasts Series at the Royal Mint is the Seymour Panther. The coins available throughout this collection will celebrate the stone statues on Moat Bridge at Hampden Court, the palace of King Henry VIII. The gold coin for sale in this listing represents one of the three options available among the gold collectibles in this series. Right now, 2022 1 oz Proof Gold British Tudor Beasts Seymour Panther Coins are available to purchase online at Silver.com.

Each 2022 1 oz Proof Gold British Tudor Beasts Seymour Panther Coin comes with an individual box. The coins are housed in capsules and set within wooden presentation cases for delivery. The coin and case arrive in themed shippers with a Certificate of Authenticity available with purchase. The coins have proof visuals with frosted design elements and mirrored background fields. The Seymour Panther image is the first proof coin design in the Tudor Beasts Series.

The Tudor Beasts Series from the Royal Mint seeks to replicate the designs of the stone statues that line Moat Bridge at Hampden Court. The statues reflect the monarchs of the Tudor Dynasty during the reign of King Henry VIII and feature images representing Jane Seymour.

Obverse design elements on these 2022 Proof Gold British Tudor Beasts Seymour Panther Coins reflect the image of Queen Elizabeth II. This portrait of the Queen was designed in 2015 by Jody Clark and shows the Queen in right-profile relief. The image shows the Queen at the age of 89 as she wears the George IV State Diadem Crown.