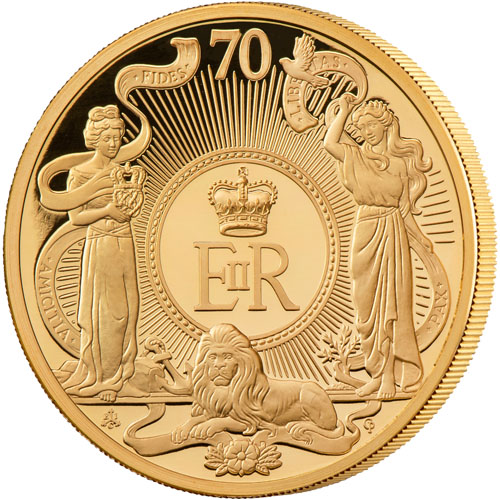 Longevity is something to be admired when it comes to monarchs. The leaders of kingdoms of the past had to deal with lesser healthcare systems, challenges to the crown, war, and other strife that could abruptly end their reign. The modern era has seen different challenges to monarchs, such as public discontent with supporting an ancient institution. Despite these challenges, Queen Elizabeth II remains a popular figure in England and celebrates her 70th anniversary on the throne in 2022. Now, 2022 1 oz Proof Gold St. Helena Queen’s Platinum Jubilee Coins are available to you for purchase online from Silver.com.

Elizabeth was the eldest daughter of King George VI, and when her father rose to the throne in 1936, she became the heir apparent. Since 1952, she has ruled over England as Queen and head of state with a steady guiding hand.

In the obverse design of 2022 1 oz Proof Gold St. Helena Queen’s Platinum Jubilee Coins, a right-profile portrait of Her Majesty, Queen Elizabeth II features in the design element. This image shows the Queen in right-profile relief wearing the George IV State Diadem, an official piece from the Crown Jewels.

These 2022 1 oz Proof Gold St. Helena Queen’s Platinum Jubilee Coins are available to purchase inside presentation displays. The display box includes a Certificate of Authenticity and protects the proof visuals of the coin.