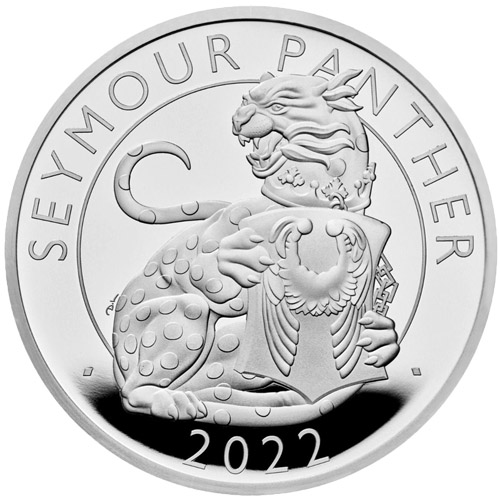 The new Tudor Beasts Series at the Royal Mint comes with a total of seven weights. The collection of gold and silver coins includes three gold coins alongside four silver coins, all of which are proof specimens. The 1 oz silver coin in the series is the smallest proof silver coin available to collectors and has the largest mintage. Now, 2022 1 oz Proof Silver British Tudor Beasts Seymour Panther Coins are available to you for purchase online from Silver.com.

The Tudor Beasts Series is based on the heraldic creatures used by the House of Tudor dynasty. In fact, each beast is inspired by a stone statue that lines Moat Bridge at the entrance to Hampden Court, the preferred residence of King Henry VIII, the second monarch from the House of Tudor.

In the first release of the new Silver Tudor Beasts Series, the Royal Mint features the Seymour Panther. This beast was gifted to Jane Seymour upon her marriage to King Henry VIII. The third wife of King Henry VIII, Jane Seymour was his Queen and Consort until her death following the birth of their son, the future King Edward VI.

The obverse side of 2022 1 oz Proof Silver British Tudor Beasts Seymour Panther Coins comes with an image of Queen Elizabeth II. This design of Her Majesty was created in 2015 by Jody Clark to serve as the fifth-generation portrait of the Queen to grace coinage from the Royal Mint. The design shows the Queen wearing the George IV State Diadem at the age of 89.

On the reverse field of 2022 Proof Silver British Tudor Beasts Seymour Panther Coins is a depiction of the Seymour Panther. Altered from the leopard of Anne Boleyn, the second wife of King Henry VIII, the panther is a spotted beast with flames coming from its ears and mouth. The panther supports a shield with the Seymour Wings.

These 2022 1 oz Proof Silver British Tudor Beasts Seymour Panther Coins are available with frosted designs and mirrored fields. The coins are protected in capsules and set within black presentation boxes. The coin and case arrive in a themed shipper with a Certificate of Authenticity available. The Seymour Panther is the first Proof Coin design in the Tudor Beasts Series.

Silver.com customer service is available to you at 888-989-7223. Alternatively, we are available online using our live chat and email address features.