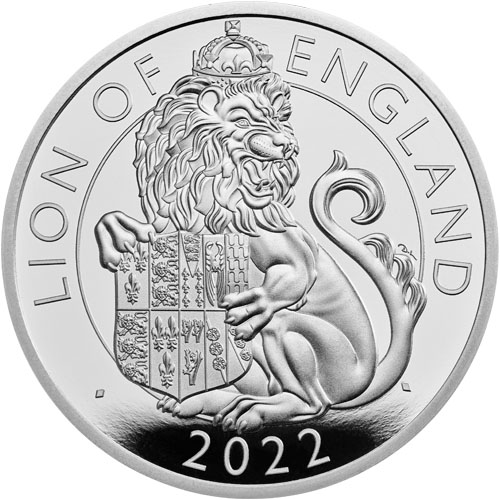 In the latest series of heraldic-themed coins from the Royal Mint, the focus shifts from the many heraldic beasts featured throughout the history of the English crown to a singular dynasty. From 1485 to 1603, the House of Tudor ruled the throne of England and featured some of the biggest personalities to ever wear the crown. Today, 2022 1 oz Proof Silver British Tudor Beasts Lion of England Coins are available to you online at Silver.com.

The new gold and silver coins for sale in the Tudor Beasts Series mimic the lineup of Queen’s Beast Coins previously issued from 2016 to 2021. The Queen’s Beast Series offered 1 oz gold, 1/4 oz gold, 2 oz silver, 10 oz silver, and 1 oz platinum BU coins, as well as gold and silver proofs. The Tudor Beasts follows this same lineup with various weights of proof coins available that outnumber the options in the BU series.

All of the 2022 1 oz Proof Silver British Tudor Beasts Lion of England Coins feature a capsule to protect the coin and a black Royal Mint presentation box for display of the specimen. The coin and its display arrive in a themed shipper from the mint that includes a Certificate of Authenticity.

On the obverse of 2022 Proof Silver British Tudor Beasts Lion of England Coins is a portrait of Queen Elizabeth II. Her Majesty has reigned over England since 1952 when she ascended to the throne following her father’s death. She is now the longest-reigning monarch in English history by a wide margin.

The reverse side of the 2022 1 oz Proof Silver Tudor Beasts Lion of England Coin comes with an image of the powerful Lion of England. The crowned lion is seated behind a shield that features the impaled arms of King Henry VIII and Jane Seymour, his third wife.

Please feel free to reach out to Silver.com if you have any questions. Our team can assist you at 888-989-7223, online using our live chat, and via our email address.