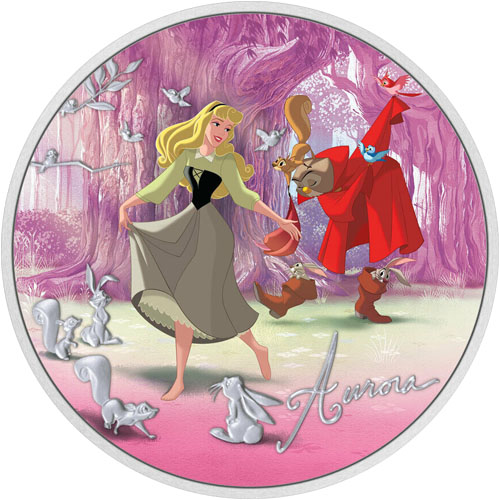 Although the story of Princess Aurora, better known as Sleeping Beauty, is one of the favored animated classics from Walt Disney, the film was considered a failure when it was first released in 1959. The 16th animated film overall at Disney and third princess-focused tale, the story of Sleeping Beauty is considered a classic in the 21st century. Today, 2022 1 oz Proof Silver Niue Colorized Disney Princess Aurora Coins are available to you online at Silver.com.

All of the 2022 1 oz Proof Silver Niue Colorized Disney Princess Aurora Coins available here come with acrylic capsules and are housed in a themed shipping booklet. The booklet comes in a themed shipper with a Certificate of Authenticity available. The COA offered with these coins includes has an individual serial number for each coin.

On the obverse of 2022 Proof Silver Colorized Disney Princess Aurora Coins is an effigy of Queen Elizabeth II. Her Majesty is shown here in right-profile wearing the Girls of Great Britain and Ireland Tiara. The portrait was created for the Royal Mint in 1998 by Ian Rank-Broadley.

The reverse side of the 2022 1 oz Proof Silver Niue Colorized Disney Princess Aurora Coin features a colorized visual of Briar Rose, as Sleeping Beauty is also known. She is shown here dancing in the forest with woodland creatures joining her in dance. The forest has hues of pink and red, with Aurora shown just as she appears early in the film. Select branches in the field and the inscription of AURORA remain in beautiful silver.

Please contact Silver.com with any questions when buying silver. You can call us at 888-989-7223, chat with us live online, or simply send us an email with your inquiries.