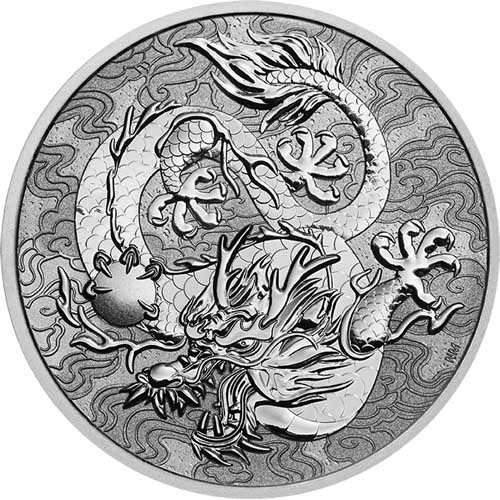 Dragons are prominent mythical creatures in cultures around the world. Many of the myths of Europe focus on the devilish role and intentions of dragons, while cultures throughout Asia also have tales of dragons. In China, dragons are one of the most prominent creatures in the history of local cultures. Now, 2022 1 oz Reverse Proof Platinum Australian Chinese Myths & Legends Dragons are available to you for purchase online at Silver.com.

Dragons may be common across various cultures around the world, but these dragons do not always fit the same story arch or background history. In Europe, dragons were often depicted as four-legged beasts that could fly, breathe fire, and create chaos for small villages and entire kingdoms alike.

In Asian cultures, including China’s culture, dragons were often depicted as four- or six-legged beasts with no wings and forked tongues like a serpent. In the case of Chinese culture, dragons are viewed as benevolent beasts that provided rain when the Jade Emperor would not and who offered divine power and right to the emperors of ancient Chinese kingdoms.

The obverse of 2022 Reverse Proof Platinum Myths & Legends Dragon Coins comes with a portrait of Queen Elizabeth II. Her Majesty is shown here in the 2015 design from Jody Clark. This was initially created for the Royal Mint as the fifth-generation effigy and debuted in 2018 on Australian coins as the sixth-generation design for the latter nation. It shows the Queen at the age of 89 wearing the George IV State Diadem.

On the reverse side of 2022 1 oz Reverse Proof Platinum Chinese Dragon Coins is a depiction of the powerful, mythical Chinese dragon. This design shows the coiled body of the beast with its mouth open and tongue out. One of its clawed feet clutches a flaming pearl. The background is filled with stylized clouds to capture the realm of the dragon.

These 2022 1 oz Reverse Proof Platinum Chinese Dragon Coins are available in classic Perth Mint displays that feature a timber lid. The platinum coin and case arrive in themed shippers with a Certificate of Authenticity included. Reverse-proof coins have mirrored designs and frosted backgrounds.