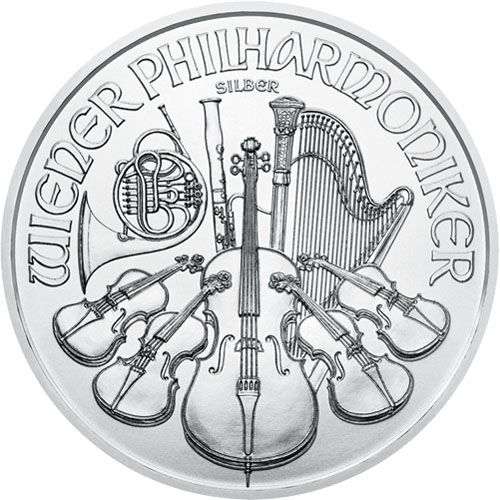 The Austrian Mint is one of the world’s oldest operating mints and one of the most prominent in Europe. The mint is a subsidiary of the central bank of Austria and is located in Vienna. Originally striking coins of the Austrian Schilling, the mint now issues Euro coins for Austria and also produces bullion coinage for the nation. Now, 2022 1 oz Silver Austrian Philharmonics are available to you for purchase online from Silver.com.

Austrian Philharmonic bullion coins were introduced by the Austrian Mint in 1989. The series has expanded numerous times over the last 30-plus years in production. From a handful of gold coins to silver bullion coins and two platinum bullion coins, the series is extremely popular with investors on the European continent.

The coins in this collection feature the same designs on the obverse and reverse field each year. This imagery was created by the Chief Engraver of the Austrian Mint, Thomas Pesendorfer, in 1989 for the debut of the gold coins. This design is not only the same each year, but it is shared across all gold, silver, and platinum weights in the series.

The obverse side of 2022 1 oz Silver Austrian Philharmonics features the image of the pipe organ inside the Musikverein. Located in the Innere Stadt borough of Vienna, the capital city of Austria. The Musikverein concert hall is the home of the Vienna Philharmonic Orchestra, one of the world’s oldest and longest-running orchestral groups.

On the reverse face of 2022 Silver Austrian Philharmonics is a depiction of musical instruments. The members of the Vienna Philharmonic use a variety of different musical instruments, including the cello, violin, harp, bassoon, and French horn, all of which are included within the design element on this side.

These 2022 1 oz Silver Austrian Philharmonic Coins are available to you individually or in bulk through this listing. The coins are available in protective plastic flips, acrylic tubes of 20 coins, or Monster Boxes of 500 coins. The box holds a total of 25 individual 20-coin tubes.