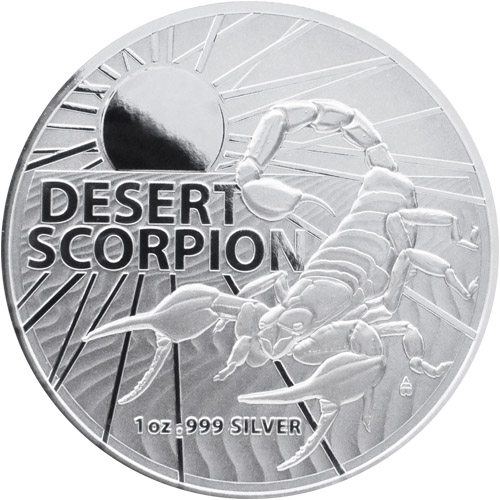 In 2020, the Royal Australian Mint introduced a new series of silver coins for sale featuring images of deadly animals from the continent. Known as the Australia’s Most Dangerous Series, this collection of 1 oz silver coins. In the third release of the collection, the desert scorpion is featured on the reverse of the coins. Right now, 2022 1 oz Silver Royal Australian Mint Desert Scorpions are available to purchase online from Silver.com.

Each 2022 1 oz Silver Royal Australian Mint Desert Scorpion offered here at Silver.com comes with an individual plastic flip for delivery. The coins are all in Brilliant Uncirculated condition and represent the third release in the ongoing Australia’s Most Dangerous bullion series.

The desert scorpion is one of several species of scorpions from around the world that live in arid deserts. The Urodacus yaschenkoi is native to Australia and endures the intense temperatures of the Australian deserts in the central regions of the continent. Female members of the species give birth to live young and will carry the babies on their backs for several days until the young are capable of living independently.

The obverse side of 2022 Silver RAM Desert Scorpion Coins comes with a portrait of Queen Elizabeth II. This depiction of the Queen came to Australian coins in 2018 and was designed in 2015 by Jody Clark for the Royal Mint. The sixth-generation effigy to feature on Australian coins, this portrait shows the Queen at the age of 89 wearing the George IV State Diadem Crown in a right-profile relief.

On the reverse face of the 2022 1 oz Silver Royal Australian Mint Desert Scorpion is an image of the namesake creature for this release. The scorpion is shown amidst the desert sands on a hot, sunny day. Scorpions live on a diet of insects, spiders, centipedes, and even other scorpions.

The Royal Australian Mint was formed with the passage of the Currency Act of 1965. The sovereign mint of the nation, it is located in the city of Canberra.