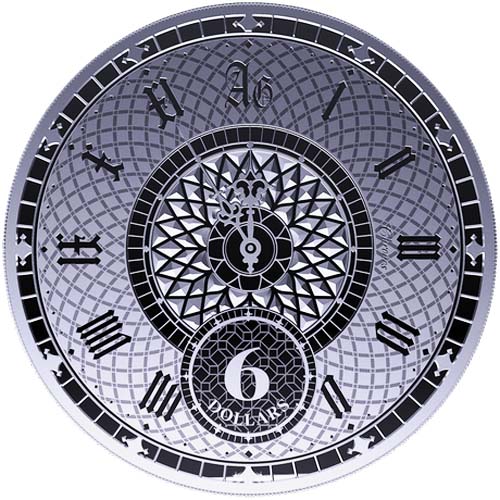 One of the most popular series produced by the Pressburg Mint is the Chronos collection, which is now in its 8th year of release. The concept behind this series is time itself, and its motto is panta rhei, meaning everything flows. The series began in 2015 as a set of silver rounds, but in 2019 the mint collaborated with the monetary authority of Tokelau and turned the series into a collection of coins instead. Now, 2022 1 oz Silver Tokelau Chronos Coins are available to you for purchase online at Silver.com.

All 2022 Silver Tokelau Chronos Coins in this listing have been struck in .9999 fine silver and include beautiful proof-like visuals. Compared to a standard BU coin, they will have a shiny, almost mirror-like appearance. The devices will also appear frosted. Upon delivery, you will find your coin housed inside a protective plastic capsule.

The idea behind the Chronos series is time itself. Since the series began in 2015, the reverse fields have featured various clock designs. Clocks are how humans measure time in our day-to-day lives, yet time has a broader meaning beyond these daily functions that continues to intrigue scientists and philosophers to this day. Panta rhei. Everything flows. That is the motto of the Chronos series from the Pressburg Mint. Through this beautiful collection of coins, we are invited to reflect on the beautiful flow and symmetry of time itself moving like water through all our lives.

Queen Elizabeth II is depicted on the obverse of 2022 1 oz Tokelau Chronos Coins. In a design by Ian Rank-Broadley, Her Majesty appears in right-profile relief wearing the Girls of Great Britain and Ireland Tiara. Also shown on either side of the portrait are the shifting gears of a clock. The background consists of a beautiful and perfectly symmetrical pattern. Inscriptions include the country of origin, year, metal type, weight, and purity.

The image of a clock is seen on the reverse of 2022 1 oz Silver Chronos Coins. The clock has an old-fashioned aesthetic, with the numbers shown as Roman Numerals in an Old English font. The hands of the clock show the time as 11:55. There are also inscriptions that read Chronos, 6 Dollars, and the silver atomic symbol AG.

Silver.com customer service is available at 888-989-7223. We are also available to you online using our live chat and email address features if you have any questions about silver for sale.