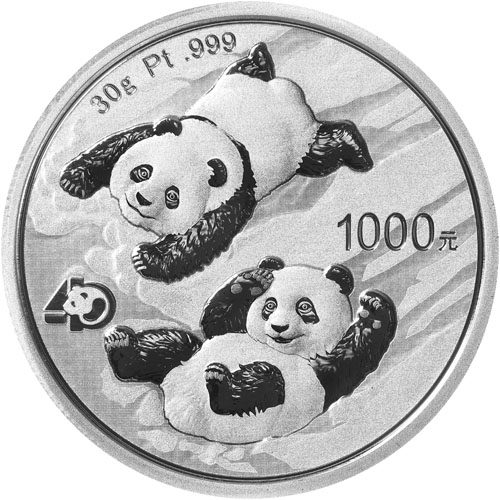 The Chinese Panda Series from the Chinese Mint is one of the longest-running bullion collections in the world. Its gold coin is the third-oldest series behind only the Gold Krugerrand and Gold Maple Leaf, and just ahead of the Gold Eagle. Launched in 1982, the Chinese Panda bullion series marks its 40th anniversary in 2022 and the Chinese Mint is celebrating in style. One of the many celebratory features of the series in 2022 is the first-ever release of platinum coins in the collection. Now, 2022 30 Gram Platinum Chinese Pandas are available to you for purchase online at Silver.com.

Chinese Panda coins debuted in 1982 with the release of four gold bullion coins. The series started out with 1 oz, 1/2 oz, 1/4 oz, and 1/10 oz gold coins that year. Over the course of the next decade, the series would expand to offer a 1/20 oz gold coin and, eventually, a 1 oz BU silver coin.

In 2016, the Chinese Mint took the unique step of abandoning the use of Troy ounces to denote the weight of its coins, opting for Grams instead. All 1 oz coins became 30 Gram coins, with the fractional-ounce gold coins becoming 15 Gram, 8 Gram, 3 Gram, and 1 Gram options, respectively. As part of its 40th-anniversary celebration in 2022, the mint now has two new Gram-based coins for investors and collectors. These are the commemorative 30 Gram and 1 Gram platinum coins.

On the reverse side of 2022 Platinum Chinese Pandas is an image of two Giant Pandas. The 2022 design is one of the most playful in the history of the series. It captures two pandas enjoying a snow day as they slide down a hill, one on its back and the other on its stomach.