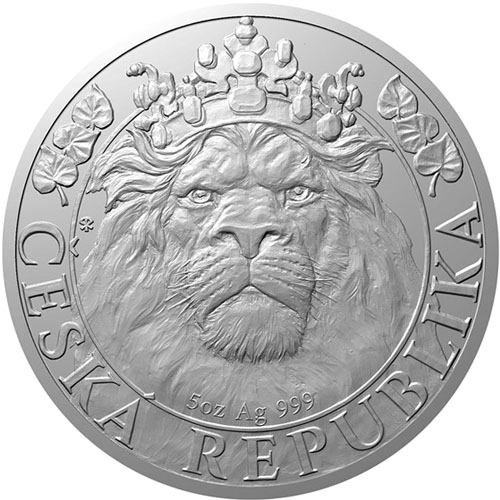 A new year means a new coin in the ever-popular Czech Lion series! This collection produced by the Czech Mint is recognized for its beautiful heraldic imagery, yearly new designs, and low mintages. Buyers also get to choose between gold and silver and from a wide variety of weights, as well. The 2022 5 oz Silver Niue Czech Lion Coins are now available to you online at Silver.com.

The Czech Mint was established when the Czech and Slovak Federative Republics were divided into separate states. It opened in 1993 and is the only domestic mint with the authority to produce coins for the Czech National Bank. The Czech Lion is released by the mint on an annual basis, with many seeing it as the country’s defining coin. 2022 marks the 6th overall release in the series.

All 2022 5 oz Silver Niue Czech Lion Coins are packaged inside individual plastic flips. Produced by the Czech Mint under the monetary authority of Niue Island, these coins have been minted in .999 fine silver and will arrive in Brilliant Uncirculated condition. While it is possible for them to contain minor flaws, by and large, they will be in extremely nice condition.

Queen Elizabeth II is depicted on the obverse field of 2022 Silver Niue Czech Lion Coins. Her Majesty is shown wearing the Girls of Great Britain and Ireland Tiara. This tiara was originally a wedding gift to Queen Mary, and later was given to Elizabeth upon her marriage to Prince Phillip in 1947. In honor of the Czech Republic, a shield and heraldic eagle are also featured on the obverse design.

The face of a lion is shown on the reverse side of 2022 5 oz Czech Lion Coins. The close-up image includes the Crown of Saint Wenceslas atop the heraldic beast’s head. This design deviates from past versions of the coin that featured a full image of a lion guarding the crown instead of wearing it. Along the border of the coin are leaves of a Linden branch in honor of the Czech Republic’s national tree. Inscriptions read Ceska Republika 5 oz Ag .999.

We encourage all Silver.com customers to call us at 888-989-7223 with questions. You can also connect with us online using our live chat or by sending us an email. Feel free to browse all of our silver for sale with our online catalog.