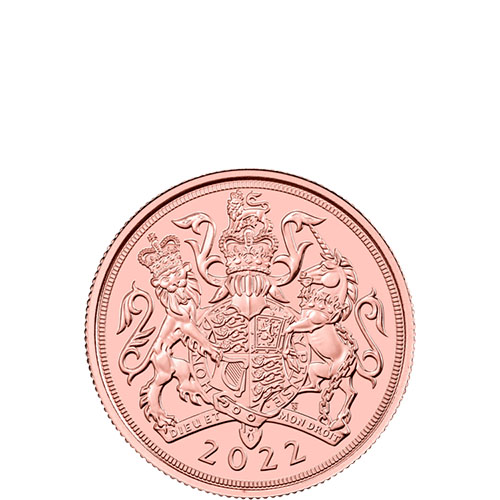 In 1489, King Henry VII issued the first coin in England to bear the name sovereign. His English gold sovereign was issued shortly after his founding of the House of Tudor following the Wars of the Roses. The coins featured a bust of the monarch on the obverse, with the Royal Arms of England and the Tudor Rose on the reverse.

These coins were issued from 1489 to 1603 throughout the reign of the Tudors. King James I brought the issuance of English sovereigns to an end, but 200 years later, the coin would be reborn. In 1816, King George III oversaw a Great Recoinage of English gold coins and the Gold Sovereign of Great Britain was born. The new sovereign featured a monarch portrait on the obverse with Benedetto Pistrucci’s depiction of St. George slaying a dragon on the reverse. This design concept remains on the coins to this day.

The obverse of 2022 Gold Great Britain Sovereigns features the fifth-generation portrait of Queen Elizabeth II. Designed in 2015 by Jody Clark, this effigy shows the Queen at the age of 89 with the George IV State Diadem on her head.

These 2022 Gold Great Britain Sovereigns are available to you for purchase with individual protective flips or plastic tubes of 25 coins. All of the coins are in Brilliant Uncirculated condition.