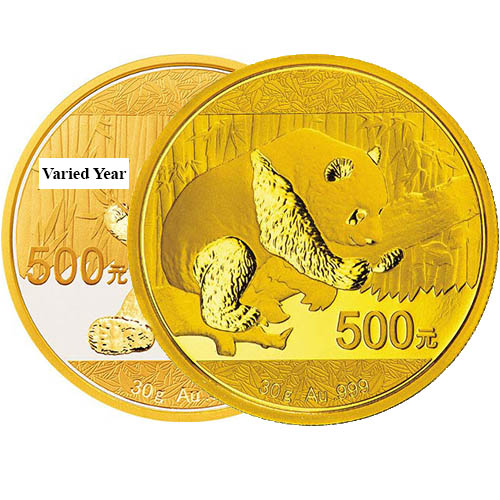 The Gold Panda is one of the longest-running gold bullion coins in the world. Though not as well known internationally until the late 20th and early 21st century, the Gold Panda coin was actually the third-ever gold bullion coin ever issued in the modern precious metals market. Today, 30 Gram Gold Chinese Panda Coin is available to you online at Silver.com.

Gold Chinese Panda coins from the Chinese Mint originally debuted in 1982 with a 1/10 oz, ¼ oz, and 1 oz option in .999 fine gold. From 1982 until 2015, the coins were struck using the internationally accepted Troy ounce weights for the coins. Beginning in 2016, the People’s Republic of China switched to the use of grams to bring the collection in line with the nation’s metric system.

The Gold Chinese Panda became the first major gold bullion coin series to use Grams and not Troy ounces for its marked measurements. The 30 Gram Gold Chinese Panda Coins in this listing are available to you from varied years of issue, which for the 30 Gram designation includes 2016 to present.

All of the 30 Gram Gold Chinese Panda coins here are unsealed from their original, sealed plastic packages from the Chinese Mint. The coins have been repacked in protective plastic, but are not originally sealed at this point by the Chinese Mint. Silver.com warehouse staff will select your coin randomly during packaging once your payment has processed, with your coin chosen based upon availability in that moment.

On the reverse of the Gold Chinese Panda coin you’ll find a new design each year. The Giant Panda is a species of bear with distinctive white and black fur, and is found throughout the central highlands of the People’s Republic of China.

The obverse of the 30 Gram Gold Chinese Panda Coin features a design of the Hall of Prayer for Abundant Harvests. This building is the primary building the larger Temple of Heaven complex which was originally constructed in Beijing in 1420 as a Taoist temple and religious complex.

The Chinese Mint strikes all Gold Panda coins using various facilities in its system. The mint is organized as a private company under the control of the People’s Bank of China and the central government.

Please don’t hesitate to reach out to Silver.com with questions. You can call us at 888-989-7223, chat with us live online, or simply send us an email with your inquiries.