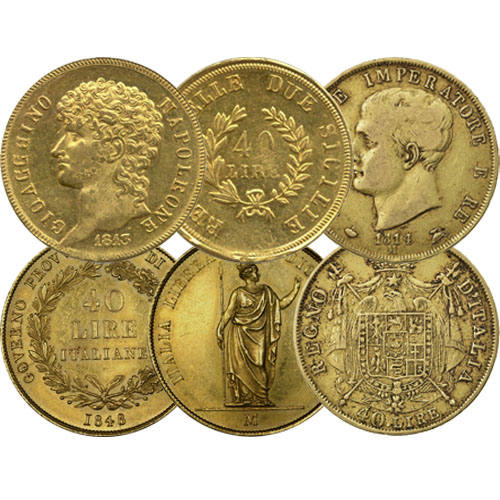 In the early 19th century, several regions of northern Italy were annexed by Napoleon Bonaparte and the French Empire. The Italian Republic was renamed the Kingdom of Italy with Napoleon serving as the King of Italy for this region. This personal alliance lasted until Napoleon’s downfall in 1814 and resulted in the production of 40 Lire Gold Italian Coins based on the Gold French Francs. Right now, 40 Lire Gold Italian Coins are available to purchase online at Silver.com.

Each of the 40 Lire Gold Italian Coins in this product listing features a protective plastic flip and is circulated condition. The coins may show signs of wear and tear or minor flaws as a result of its previous circulation. These gold coins were produced throughout the region that made up the annexed Kingdom of Italy and struck by the Milan Mint from 1807 to 1814.

Napoleon and the French Empire annexed several regions around modern-day France in the early 19th century. Among those regions were 13 provinces of Italy. While six of those provinces were ruled directly by the French Empire, seven were controlled as a client state known as the Kingdom of Italy in which Napoleon enjoyed the title King of Italy.

On the obverse of the 40 Lire Gold Italian Coins is a left-profile portrait of Napoleon. The design of these 40 Lire Gold Coins is the same as the French Francs issued in this era, but using the Lira denomination that would later be adopted by Italy as its official currency from 1861 to 2002. Napoleon’s bust is surrounded by Italian inscriptions that identify him as Emperor and King.

The reverse face of 40 Lire Gold Italian Coins features the crowned shield with eagle behind it used by the French Empire. This side of the coin includes the face value. When Napoleon was defeated in Europe by the allied nations and kingdoms led by England, his Kingdom of Italy fell apart and ceased to exist after the Treaty of Paris in 1814.

If you have any questions about these gold coins, please contact Silver.com. Our customer service team is available to you at 888-989-7223, online using our live chat, and via our email address.