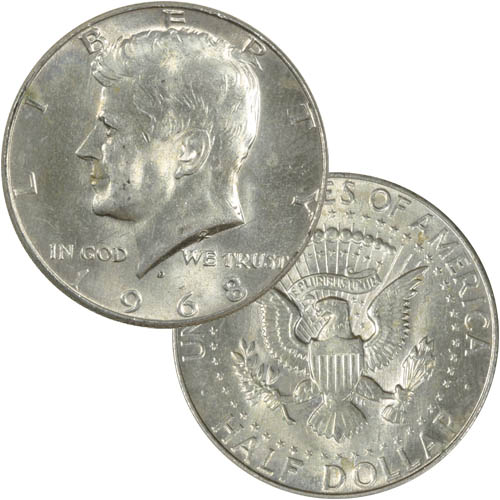 Any quantity available for $4.24 per oz over spot!

Prior to 1965, coins such as the US dime, quarter, and half-dollar contained a total of 90% silver in the metal content. With rising prices for silver in the 1960s, the US Mint was forced to drop the silver content of its coins to 40% instead. This did not last long before the US Mint switched to a cupro-nickel alloy instead for its circulation coins. Today, you can purchase some 40% Silver Coins with a total face value of $1 (USD) online at Silver.com.

All 40% Silver Coins available in this listing are shipped to you in plastic bags. You will receive a total of two half-dollar coins inside the bag for a total face value of $1 (USD). The date marks for your coins are chosen at random based on availability at the time your order is prepared for shipping. As mentioned above, the only available date marks include a range from 1965 to 1970.

The designs of the Kennedy Half Dollar are unique in that they are the only ones the individual depicted actually had a say in the creation of. President Kennedy was assassinated in November 1963 and by March 1964 new half dollars were out with his image. This was made possible because existing images of the president from his Presidential Medal Series, which he approved himself, were used.

On the obverse of Kennedy Half Dollars is the Gilroy Roberts left-profile bust of President John F. Kennedy. The reverse side of the coins includes Frank Gasparro’s modified image of the Presidential Seal. The seal includes the heraldic eagle of the United States with a ring of 50 stars around its figure.