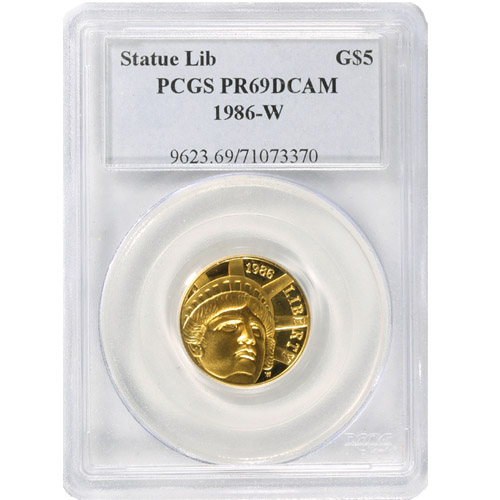 The United States Mint regularly issues commemorative gold coins in the modern era to mark important moments in national history. Modern commemorative coining resumed in 1982 after ceasing in 1954 after more than a century of commemorative coining. Now, $5 Gold US Mint Commemorative Coins are available to you for purchase online at Silver.com in near-perfect condition.

The obverse and reverse design visuals on $5 Gold US Mint Commemorative Coins in this product listing will vary based on the program and the moment being honored. Examples of possible designs include scenes from the Apollo 11 moon landing, the flag of the American Legion, busts of President Thomas Jefferson, and Olympic athletes. Both the obverse and reverse designs will match with the theme of an individual coin.

These $5 Gold US Mint Commemorative Coins are available to purchase in near-perfect condition. Coins with a Mint State 69 certification showcase full, original mint luster, and a maximum of two minor detracting flaws. Those flaws are limited in nature to minuscule contact marks or hairlines and limited in scope to those areas outside of the primary focal points of the coin.

This is a random year listing at Silver.com. We are unable to guarantee the specific dates and designs on the coin you receive. If you buy multiples, please remember you can receive several coins with the same design elements and dates.

Silver.com customer service is available to assist you at 888-989-7223 with questions about gold for sale. We are also available on the web using our live chat and email address.