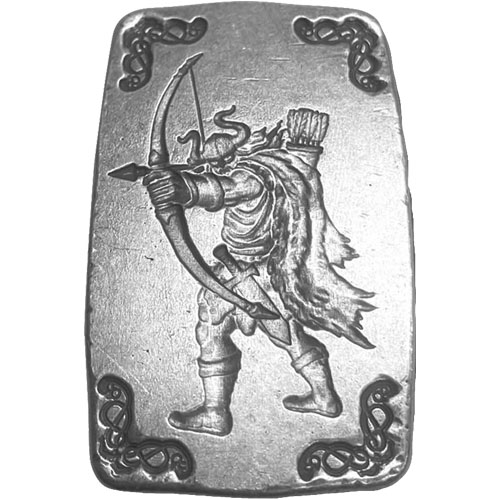 Some of the most feared warriors of the Medieval Era descended from the north to pillage, raid, and conquer portions of the British Isles, Iceland, Greenland, and northern Europe. Though they were skilled and fearsome warriors, the Vikings were also excellent seafarers and traders whose routes reached as far as the Middle East. Today, 5 oz Silver Monarch Archer Viking Bars are available to you online at Silver.com.

Known during their era as Norsemen or, in England, as Danes, the people known today as Vikings came from the Scandinavian region of northern Europe. When the Vikings first emerged as a force to be reckoned with in Europe in the 8th century, the raiders, traders, and sailors came from a variety of smaller kingdoms within modern-day Sweden, Denmark, Norway, and Finland. By the end of the Viking Age, three larger kingdoms had formed: Sweden, Denmark, and Norway.

All of the 5 oz Silver Monarch Archer Viking Bars available here at Silver.com come with individual packaging. The bars are housed in custom leather pouches that feature a drawstring enclosure. The bars have rustic visuals with stamped markings on both sides.

The obverse of 5 oz Silver Archer Viking Bars comes with an image of a Viking warrior. Specifically, this warrior is a skilled archer. His powerful physique allows him to manipulate a large bow, drawing back a long arrow as he prepares to fire at his target. An imposing figure, the physique of this Viking archer isn’t the only thing that will intimidate his opponents as he wears a large, horned helmet.

On the reverse side of Silver Monarch Archer Viking Bars is a depiction of the common Viking longboat. These shallow-draft vessels were capable of crossing oceans, but also provided the Vikings with easy inland access via shallower waterways like marshes, rivers, and creeks. Longboats had a distinctive design that effectively offered two bows to the ship. This allowed Vikings to run the boats ashore when raiding and quickly return to the vessels and depart without having to turn the ships or put excessive effort into dislodging the ship.

When you buy silver bars online, Silver.com is happy to offer assistance. Please contact us at 888-989-7223, chat with us live online, or simply send us an email with your inquiries.