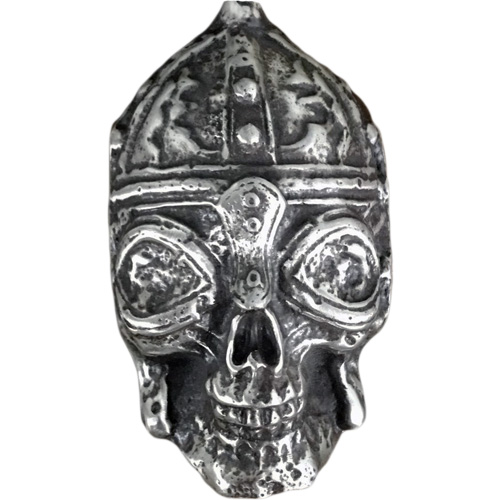 The people of Rome enjoyed many forms of entertainment that seem barbaric by modern standards, and none seems more objectionable than watching two humans fight to the death. For the men and women who performed as gladiators in the ring, there were only two options: life and death. While most were slaves, some actually joined gladiatorial schools voluntarily. Today, the 7 oz MK Barz Silver Hand Poured Warrior Mask is yours to buy online at Silver.com.

MK Barz is a privately-owned refinery that is family operated by owners with more than 45 years of experience collecting and grading coins. The refinery’s silver bullion products are all hand poured and hand stamped for a unique appearance and collectible appeal.

The vast majority of Roman gladiators were actually slaves of the Roman Republic, expendable individuals whose deaths mattered little to the republic beyond the value of the entertainment they provided in dying in arenas throughout the empire. However, Marcus Attilius was an example of one man who volunteered to join the gladiatorial schools.

Attilius was born a Roman citizen and volunteered to serve as a gladiator to satisfy debts he owed. However, his prowess in combat was evident from the moment he stepped into the ring against his opponent. The first man he faced? Hilarius, a gladiator of the Emperor Nero who had 14 career fights, 12 of which were clear wins and occurred consecutively prior to his defeat by Attilius.

The 7 oz MK Barz Silver Hand Poured Warrior Mask features a replica depiction of the mask worn by Attilius in the ring. It features a high crown on the helmet of the mask, with deep cheek plates to cover his jaws and protective plates around the eye sockets. Wearing the mask, as with all other releases, is a human skull, representative of the individuals who risked death simply by stepping into the arena in these masks.

On the reverse of all LTD Warrior Series silver masks you’ll find the individual serial number of the mask, with its production reflected out of 500 in total. Additional engravings include the name “MK Barz,” and the mask’s weight, purity, and metal content.

Please don’t hesitate to contact Silver.com if you have questions. Our customer service team is available to you on the phone at 888-989-7223, online using our live chat feature, and using our email address. Don’t forget, a silver price chart is available on our website at all times!