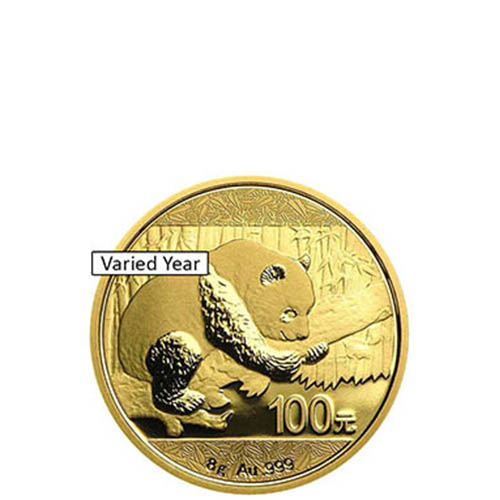 When buying gold online, you’ll find a lot of options awaiting between gold bullion bars and coins. Gold bullion coins from sovereign mints are popular investment choices, and few are as popular as the Gold Chinese Panda. Introduced in 1982, these coins are predated only by the Gold Krugerrand and Gold Maple Leaf. The 8 Gram Gold Chinese Panda Coin is available to you right now for purchase online at Silver.com.

The Gold Panda coins were first issued by the Chinese Mint in 1982 with a 1 oz, ½ oz, ¼ oz, and 1/10 oz gold coin available. After just one year, the mint added the 1/20 oz coin. These options remained through 2015. Starting in 2016, the coins were still available in the five denominations used on these coins, but now with weights officially measured in Grams instead.

On the obverse of all 8 Gram Gold Chinese Panda coins is the image of the Hall of Prayer for Abundant Harvests. Constructed between 1406 and 1420, emperors would visit the site to prayer for good crop yields for the empire and Taoist religious followers would come to pray at the site.

The reverse of 8 Gram Gold Panda coins features a new image of the Giant Panda species of bear each year. Silver.com cannot guarantee you a specific date mark or accompanying Giant Panda design through this listing. Each coin is available to you in varied years chosen by our warehouse team when your order is processed for shipping. The coins have been unsealed previously from their original Chinese Mint packaging, but do arrive in generic protective packaging to protect the coin during shipping.