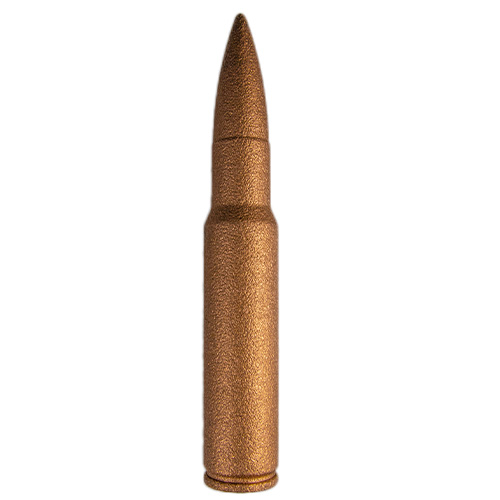 One of the most devastating field weapons ever introduced to warfare was the M2 Browning Machine Gun. Developed near the end of World War I by John Browning, this gun has been used by troops on the ground, as a weapon mounted on armored vehicles, and even on aircraft platforms. Now, 8 oz Copper Bullets styled after the .50 Caliber Browning Machine Gun Round are available to you for purchase online from Silver.com.

John Browning was one of the most prolific American gun designers of the 20th century. At the request of General Pershing, he began to develop a heavy machine gun following the entry of the United States into World War I. The initial model was the M1919 machine gun firing a modified .30-06 cartridge.

After the United States captured some German munitions, Browning increased the muzzle velocity and other characteristics of the round for his machine gun and eventually developed the M2 Browning Machine Gun with the .50 caliber round. The M2 is the longest-used firearm in the US inventory behind only the .45 caliber M1911 pistol, a firearm also developed by Browning.

These 8 oz Copper Bullets match the appearance of the .50 Caliber round for the M2 Browning Machine Gun. Each one has rough textures around the sides with a flat base that bears the inscriptions identifying the copper bullet. Your 8 oz Copper Bullet arrives with an individual plastic bag.

Silver.com customer service is available to assist you with questions at 888-989-7223. Our team is also available online using our live chat and email address features.