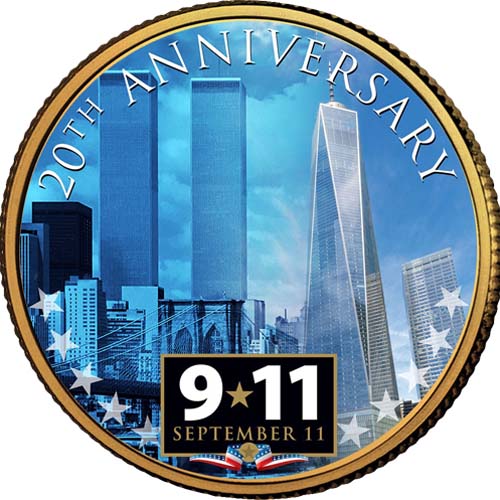 US legal tender coins are a popular vehicle for creating commemorative coins for collectors. Circulation currency in the US May feature a simple cupro-nickel alloy, but with the application of colorized visuals and gold plating, these specimens can be transformed into affordable pieces for collectors that can mark any notable occasion. Now, 9/11 20th Anniversary Gold Plated Quarters are available to you for purchase online at Silver.com.

The 2001 introduction of a Statehood Quarter for the state of New York marked the start of the third year of issue in the series. Like its successor, the bullion Silver ATB coin series, the Statehood Quarters were released with one design every ten weeks, resulting in five issues per year. New York was the first state issued in 2001 and the 11th overall.

All coins in the series feature designs honoring the background and history of the state. Designs such as state flags, portraits of living persons, and facial portraits of deceased persons were blocked in the series. The designs had to emblematic of the history, traditions, and symbols associated with a given state. Additionally, the designs were released in order from the date each state either ratified the US Constitution or was later admitted to the Union. New York was the 11th state to ratify the Constitution, joining the Union as a result on Jul 26, 1789.

The obverse of each 9/11 20th Anniversary Gold Plated Quarter comes with colorized design elements overlaying the portrait of President George Washington. The images captured here in full-color graphics include the skyline of New York City prior to 9/11 with the Twin Towers reaching toward the heavens. To the right side, One World Trade Center now dominates the skyline as the building to rise from the ashes of the One World Trade Center site.

On the reverse of 9/11 20th Anniversary Gold Plated Quarters is the image chosen to represent New York in the Statehood Quarters Series. Here, the outline of the state of New York includes tracings of the Hudson River and Erie Canal across the landscape. The Statue of Liberty stands watch with 11 stars, denoting New York’s admission as the 11th state.

These 9/11 20th Anniversary Gold Plated Quarters are available to you with brilliant enhancements. The reverse has a clad layer of 24-karat gold and the obverse has colorized visuals bringing the past-and-present skylines of New York City to life. Each legal tender coin comes with a capsule and a Certificate of Authenticity.

Silver.com customer service is available at 888-989-7223. Our team is also available online through our live chat and email address.